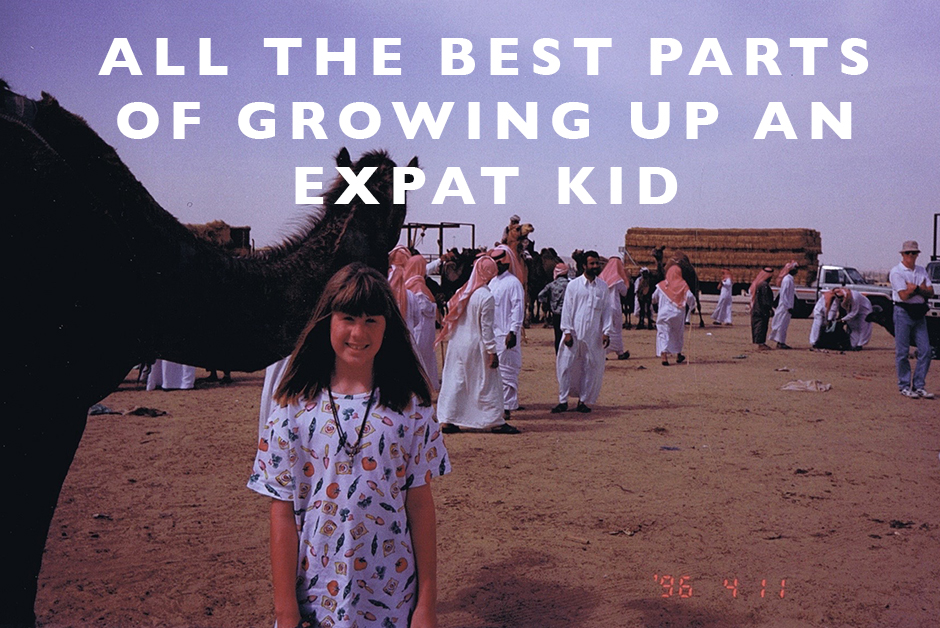 I’ve written quite a bit on Land of Marvels about my experiences growing up as an expat kid in Saudi Arabia and while truthfully, it took me a long time to come to terms about what that exactly meant in my life, especially as an adult, I can say now that while I credit my childhood in the Middle East to shaping exactly who I am, Saudi is no longer a huge part of my everyday with work and life.  It’s taken me years to get to the point where I am, seeing my time in the Middle East through a lens, looking at the good and the bad that it brought to my life and I’m so very thankful for my childhood there.  I’ve realized over time that my experiences there don’t have to be legitimized by other people, I’ve learned that my acceptance for other cultures, other religions, other ways of life stems directly from my childhood there and I’m so thankful that that’s my world view as an adult.  I’ve also realized that just because I have a fondness for that region of the world, it doesn’t mean I agree with everything happening there.  And I’ve realized over several years that my story there is completely different than my parents’ lives there or my brother’s who doesn’t remember as much as me as he was younger when we left.  As I’ve gotten older, I’ve also realized that I feel differently about places in my life than most people and I have a deep sensation that attaches me emotionally to places in a very unique way.  I think, looking back on it now, that’s also why my memories and my association with my birth country made such a deep impact on me personally.

But more than anything, Saudi has come up in many conversations recently with friends and family and it really made me think about that part of my life a little more than I had been recently.  And while there definitely are a lot of things in my life that were a lot harder because I grew up as an expat kid and readjusting to life in the USA at 11 years old was definitely a very long and painful process, looking back now, I see only the silver linings in all those sad and somewhat un-relatable situations.  And those silver linings have become all the best parts of growing up as an expat kid and truly bring so much to my life as an adult.

We collect memories, not things.

This specific part of the way I see the world (along with many other expat kids) has come up a lot lately as my grandparents are moving out of and selling their house they’ve lived in for 50 years.  It’s been very hard for them to part with the house and everything in it, along with many of their kids having a hard time letting go and saying goodbye to the house they’ve had their whole life.  For me though, it’s not that hard to say goodbye to material items like that and it never really has been.  And that’s often hard for people in my life to understand how I can have such a light attitude to things and not have a lot of emotion when they go away.  But here’s the thing, at 11 years old I left my childhood home a world away, I knew as a kid that I would most likely never see my home again, that I most likely would never see the people I had grown up around again.  And those first few years back in the US were incredibly painful for me.  I felt like my world had been ripped away, I felt like no one in Medford, Oregon (where we moved) could have any inkling of what I was personally going through or what I had experienced.  I felt like I had had this entire life, people, places, things and then suddenly it was gone, replaced by a new life where no one, not my friends or teachers, could understand my past one.  I won’t lie, it was super hard as a kid to go through that.  But you know what?  I’ve been thinking recently a lot about what that experience, though painful, taught me.  I don’t relate memories to things, I don’t get sad when a house is sold or when material things are lost, because for me, my experience moving back to the USA from Saudi taught me over years of self inspection that the memories aren’t lost just because you don’t have a physical manifestation for them anymore.  The memories of my childhood are stronger than ever and I don’t have those connected to a house or a material item and I’m so thankful for that.  It’s allowed me to live a life not connected to things but instead to cherish the memories even more.

We look at the world differently.

Talk to an expat kid and then to a kid who has lived in one place their whole life and I guarantee the way they look at the world will be different.  Expat kids often look at the world as a small place, connected and accessible.  Someone who has lived their whole life in one place in their native country will often see the world as vast and unattainable.  And while one view isn’t necessarily better over the other, it’s one of the things that I’ve come to really cherish about being an expat kid.  I’ve always felt like if I wanted to see a country or go to a new place, I could do it while so many people around me in my life don’t share that ease with the world.  Expat kids have grown up knowing different places, different languages, different foods, different people.  The way we see the world will always be different than most and that is such an enormous blessing in our lives.

We realize the strength of our voices and ideas.

As an expat kid, I have a very unique view of the world, specifically of the Middle East.  And it’s in that unique view and experience that I’ve come to realize is a vital part of who I am, and therefore a vital part of who I am in my life and in the world.  I’ve had several conversations over the years with people who are very anti-Muslim and more often than not, when they hear my perspective and my experiences, they often admit they might have jumped too quickly into their viewpoint.  This is part of the severe problem in our world at the moment, if you don’t know a Muslim, or a gay person, or someone from a minority ethnicity group, you might not have the experience to accept them.  But when you have the experience of knowing those people, they suddenly don’t become some “other” group and they become actual individual people, not just a generalization.

I’ve always been fiercely protective of people in my life who practice Islam and have always been very vocal against anyone who would attack Muslims, specifically because I know with certainty they are wrong.  When someone attacks someone for being Muslim because they think all Muslims are terrorists, I find it a personal attack on myself.  I grew up surrounded by Muslims, I spent 11 (almost 12) years of my life in a country surrounded by incredible people, by people just living their lives, praying to the God they believe in.  As an expat kid with that experience, I realized as I became an adult that I had the duty to share that with the world.  I still feel an immense duty to my birth country to talk about my experiences and to offer a different perspective to those who would condemn an entire part of the world.  As expat kids, at some point, it’s imperative we realize the strength of our voices and ideas because our unique view of the world and our singular experience might just help to change it by opening people’s minds and hearts to something different.