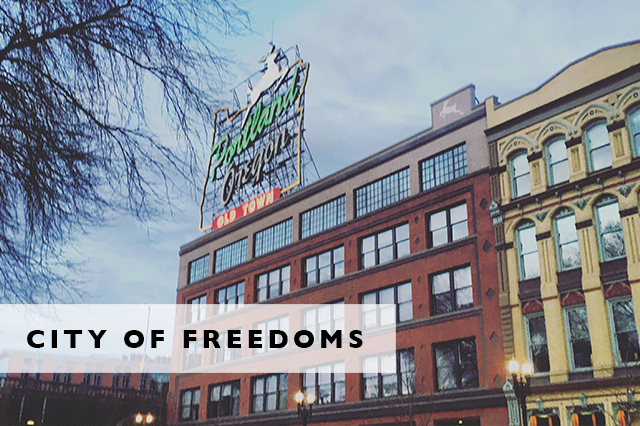 I originally had another post scheduled for today, pre-scheduled knowing that I’d be busy coming home from our trip to Yellowstone.  But then, in the middle of our trip, my city became national news.  And if you haven’t heard, a week or so ago a white supremacist man was on the light rail commuter train in East Portland at rush hour.  He began being verbally abusive and saying racist comments at two young girls on the train, one black, one Muslim.  And apparently in the span of just a few minutes, three men tried to come to the aid of the girls being abused and two of them were killed, the third injured in a knife attack by the abusive man.  In the span of a few moments, two lives were lost, fear was spread and hate held a knife.

When I woke up the next morning at our hotel on the road and saw the story, I was immediately stunned.  For those of you haven’t been to my home city of Portland, we pride ourselves there on being very open-minded and welcoming – whoever you want to be, however you want to look, whoever you want to love – we don’t care, we embrace it.  In fact, Portland is a haven for free thinking, for acceptance.  So this… this was beyond our reason, so unlike Portland that it broke my heart.

I’ve lived in Portland almost 12 years now and in that time, I have come to fall so deeply in love with the spirit of the city of roses, a place I really pride myself on being from, a place that it doesn’t matter what God you pray to, what color your skin is, who you choose to love or what you want to do with your life.  Portland is a city of freedoms, a city of love.  So when this event that was plastered on TV’s across the country happened, I couldn’t help but feel a deep grief for my city.  As many people have been saying, only in Portland would two people give up their lives to help others in need.  That, while incredibly sad and horrific, is the silver lining in all of this hate.  My city, my fellow citizens, stood up for those that needed it.  They spent their last moments on this planet protecting two girls that needed it and that, I guess, is a poetic fight against hate.  Those heroes chose love, they chose courage.

This whole event has been weighing on my mind every day since it happened over a week ago.  And there have been many moments that I find myself just completely drained from all the hate in this world we call home.  It hits me in quiet moments when I look around, when I see the news headlines, when I see such horrific events happening all of the world.  And sometimes it really does seem like too much, sometimes it feels like there is nothing we can do.  I often feel powerless, hopeless against the deluge of hate and ignorance that floods our world.  But then in the still moments, I look at the incredible landscapes on this planet we call home, I look at the people around us that are willing to sacrifice themselves to stand up for someone else.  I look at the good, at the kind, at the awe-inspiring.  I look a little deeper beyond the surface and I realize that what the world really needs, what we all need, is more love, more kindness, more empathy.

I often wonder if some of these people that cause so much heartache in the world around them, if they had somewhere along the way had been shown more love, if someone had taught them to love instead of hate, would the world be different?  If we stopped looking at how different we are and just acknowledged each other for how similar we are, could we help save ourselves?  If we all stopped for just one day and were just kind to everyone we encountered – would it help?  I honestly don’t know.  The problems we face, the hate that is out there floating around in the world, it’s all so complicated and rooted so deeply.  I guess the only thing I know for sure is that with a little more love put out into the world, what can it hurt?

So today, tomorrow, a week from now, a year from now, I beg of you, please be kind, please promote love over hate, stand up for acceptance over bigotry, and I hope like those heroes who stood up to hate in Portland and lost their lives, may we all have the courage to stand up when hate is rearing its ugly head.  May we all have the courage that Portland showed, may we all be as brave as the city of freedoms that I call home.