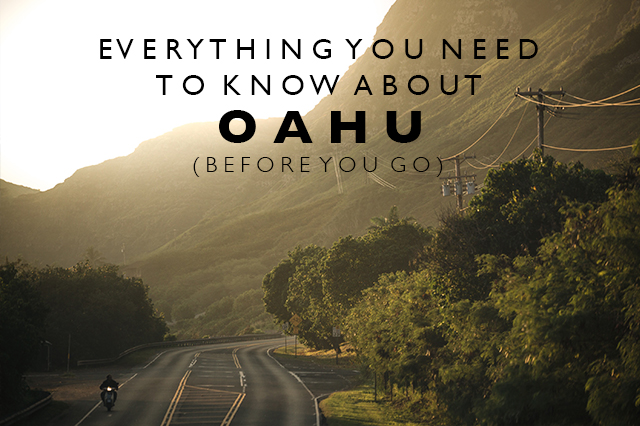 With back to back trips to Hawaii these last couple weeks for work (and a little exploring), I thought we’d do a couple consolidated Hawaii weeks on Land of Marvels!  So look forward to finding out all the inside tips you need to know before a trip to the Islands all this week and next!

I’ve spent a lot of time on Oahu, both living there and visiting for work often.  As the most populated island in the Hawaiian chain, it’s often where you’ll head when vacationing in Hawaii, but the island also has a lot of locals living and working there which makes it much more than just the resorts you’ll find in Waikiki.  So before you head out on your vacation to paradise, here’s everything you need to know about Oahu before you go.

Oahu has horrendous traffic.  Rain or shine, Sunday afternoon or weekday rush hour, the traffic on the H-1 in particular is horrible.  Expect to give yourself extra time to drive places on Oahu and never discount the fact that you might sit on the freeway for a while.

Local areas look a whole lot different than the resorts.

Most people just see the resorts of Waikiki or the touristy parts of the North Shore, but the real Oahu looks a whole lot different than you might expect.  The rest of the island is a lot more run down and has a whole different set of aesthetic rules than the tourist areas.  The infrastructure of the local areas is also majorly needing an upgrade, so expect rougher roads and less “finesse” than the tourist areas.  Also expect the terrain to change as you see more of the island, as mountains and cliffs and rainforests replace beaches as you drive around Oahu.

Accept the annoyances and try to ignore them.

Hawaii has its fair share of annoyances.  Like tropical bugs and “bulky garbage” pickup days where everything from mattresses to old bathtubs are strewn along all the sidewalks of the island.  To thoroughly enjoy your stay and your exploration of the island, try to ignore some of the stuff that is annoying on Oahu and focus on the beauty of the island instead.  Granted most of these annoyances will occur in the more local areas of the island, but if you’re headed out of your resort hotel, it’s good to be aware of them.

The culture is very different than the mainland.

When I moved back to Portland from Honolulu, I often got the shock look and comment “why would you leave Hawaii????”  In truth, I had a hard time with the cultural differences living and working on Oahu.  The working and local culture is a whole lot different than you might think and the differences from the mainland are vast.  If you’re venturing into the local areas, realize that you might not understand some of the cultural issues so be polite and courteous if you’re not aware.

Realize that just because you’re on vacation, the rest of the island locals are living normal day to day lives.

One thing that I notice every time I’m in the Islands, is the lack of courteousness from tourists to the locals.  Understandably if you’re on vacation in Hawaii you’re perhaps not thinking about the local population, but remember that as you’re relaxing on the beach, there are thousands of other locals trying to go about their day and work and live their lives.  So be polite and courteous always.