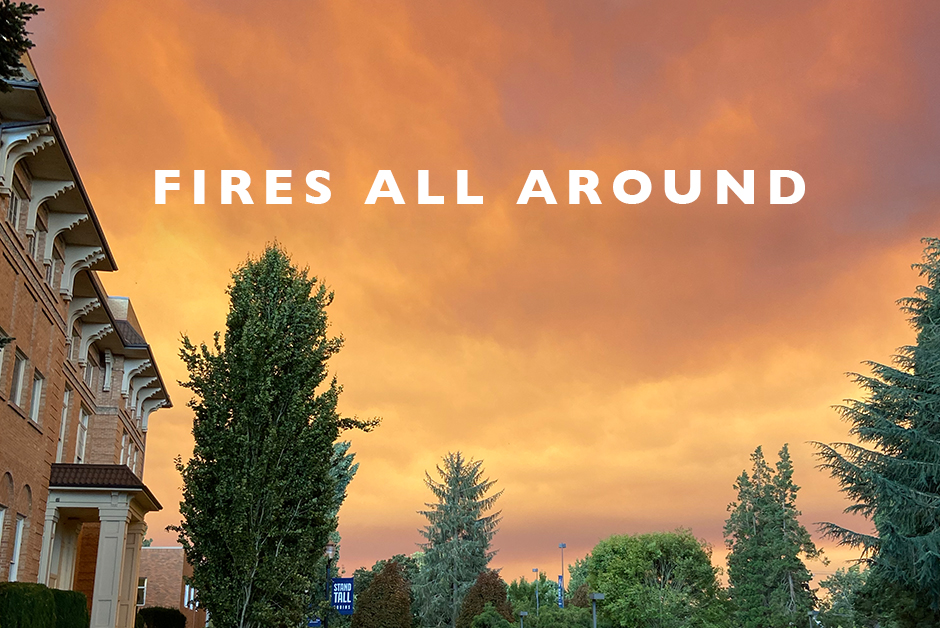 As I sit here writing this post, looking out the windows from my house, the sky is orange, the air heavy with a thick smoke.  It smells like I’m next to a campfire, even when indoors.  Ash is falling from the sky like snow.  People are loosing everything they own and their houses are burning down.  Entire cities and suburbs are being evacuated.  This is Oregon right now, with fires all around.

If you haven’t seen the news about Oregon and the entire West Coast right now, please take the time to understand what is going on.  The wildfires burning right now, specifically in Oregon, aren’t burning just forests as we do tend to have in the Summer.  These fires are burning towns to the ground.  These fires are on the outskirts of major towns and cities in the state. Currently as of writing this, we have almost 1 million acres of land burning and 500,000 people are on evacuation orders.  To put that in perspective, that’s 10% of Oregon’s population.  Another way to look at it: that’s basically half of Portland on evacuation orders.

This wildfire season will go down as the worst we’ve ever had to date.  The loss of land, of property, of life will be the worst on record.  But I fear that those “worst’s” are just going to keep getting worse each year ahead.  Climate change is creating this system where each year it keeps getting worse.  Fires, hurricanes, tornadoes, every year we brace for worse to come.  Each year we pick up the pieces afterward but we don’t make any real changes to fix what might be coming in the future.

Fifteen years ago when I moved to Portland, it rained several weeks of the Summer.  It was actually kind of a joke in that people moving to Oregon knew that it basically rained the whole year.  Now, fifteen years later, I can count on one hand the days of rain we’ve had this Summer and in the last few Summers previously.  That’s climate change.  And we must do something about it.  It’s threatening our lives, our businesses, our homes.  And it’s getting worse and worse every year.

I am so devastated by what I see around me in Oregon right now.  Family members being evacuated, skies orange with smoke and flames.  Towns gone, wiped off the map in a few hours.  Homes burned, natural landscapes charred.  The destruction is everywhere we look.  I wish I could look outside at blue sky and green trees.  I wish I could walk outside and breathe in a fresh breath of Pacific Northwest air.  Instead, I see thick bands of smoke, air quality that is the worst in the world (seriously), and an orange haze that reminds me every minute of every day that there are fires all around.