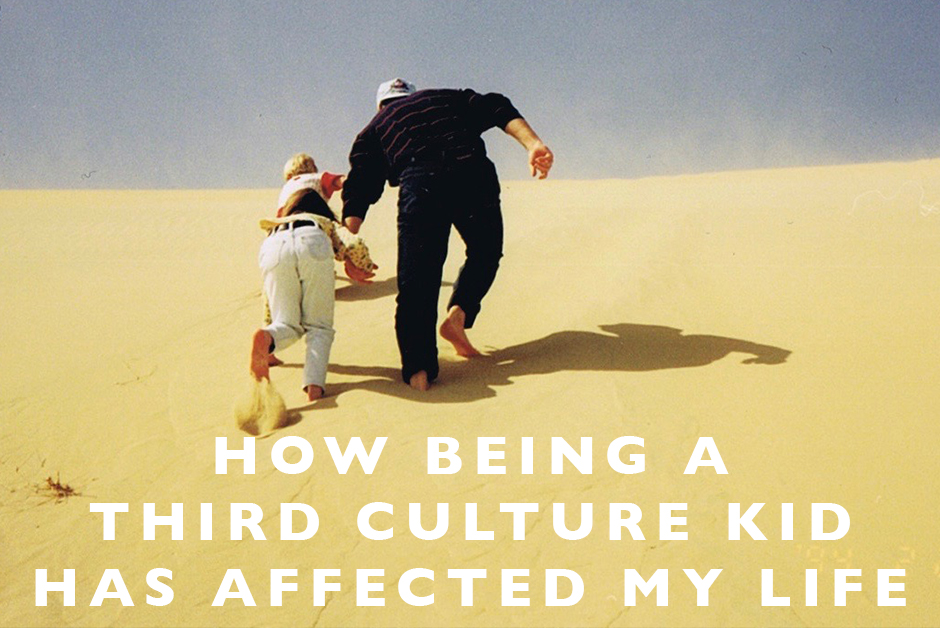 A few months ago, I gave a speech at a local university here in the Portland area.  If you’re interested, you can listen to the full speech here.  In short though, the goal was to talk to design students about who I am, a little bit about my history and then about my career as an Interior Designer.  As I was writing the speech, it dawned on me just how much my childhood abroad has shaped every aspect of who I am as an adult, as a designer, and as a person.  I talked about my childhood abroad in Saudi Arabia and I talked about my experiences traveling and how those things shape how I design and how I see the world.

After the speech, a few students came up to me and asked me if I was a “third culture kid.”  I can’t even explain how much my heart leapt in that moment because that term literally changed my life when I first heard it 15 years ago, as a freshman in college. The two students I was talking to were also Third Culture Kids and after hearing me speak, they knew we had so much in common.

I’ve talked before here on Land of Marvels about what that term means, but in short, it means that you grew up in a country that isn’t the country of your citizenship.  And as you’re not really from that country and you’re not really from the country of your passport, you create a sort of third culture psychologically.  For example, I was born and raised in Saudi Arabia but my parents were American.  I was born with a Saudi birth certificate but an American passport.  I wasn’t Saudi even though my entire childhood was spent there and I wasn’t really American either, because my first 12 years of life I barely spent any time in the States.  So children like me, we create a third cultural identity.  We create a culture as a mix of the place we lived and the place written on the front of our passports.  Third Culture Kids are expat kids, we’re kids born into a culture that is different from where our parents are from.  We’re culturally fluid and that affects our entire lives going forward.

We can fit into a number of different cultures.

I remember from a very early age easily fitting into cultures around me.  As a kid, I didn’t feel like I was any different than the Arab kids I would play with.  I didn’t feel like I was any different when my family would go into Saudi cities and eat shawarmas on the street corners like everyone else.  In hindsight, I realize that the little blond girl must have stood out, but at the time, that was my home.  It was the only place that I had ever known and I felt safe, I felt included in what was happening in the world around me.  Being a Third Culture Kid, we learned very early on that we can adapt and fit in anywhere we want.  Visually, we might not.  But culturally, any country I find myself in to this day, I feel at ease in knowing that I’ll do my very best to fit in with local customs, local standards.  I’ll do everything I can to be respectful, to be quiet, to do as the locals do.  Seeing the world that way (instead of trying to insert myself as an American) has allowed me to have such incredibly deep emotional moments around the world and I treasure that.  Third Culture Kids are culturally fluid by nature and that has been a huge blessing in my life.

We are curious about the world.

Drop a Third Culture Kid into any situation and I can almost guarantee we’ll be curious.  By nature, our upbringings made us question things.  It made us look deeper and not take things just at face value.  We are interested in other cultures, other people, other ways of doing things.  Third Culture Kids are inherently interested in finding out more and will be inquisitive throughout their lives.

Perhaps the most important asset I believe in as an adult is how I value diversity and an open-mind.  I without a doubt credit that viewpoint with being a Third Culture Kid.  TCK’s grow up in a country that isn’t their own.  Kids like me grow up all over the world in societies full of different types of people, different religions, different ways of life.  I grew up on the Persian Gulf, with neighbors from all over the world.  I spent my weekends exploring Saudi Arabia, sledding down sand dunes with Saudi kids, eating Arabian sweet bread from ovens on the tiny sidewalks of Rahima and hearing my dad chat and laugh with local Saudi guys in the limited Arabic that he spoke.  I grew up hearing Arabic on a regular basis and hearing the call to prayer multiple times every day.  Those experiences, those sounds, they were normal and I still hear them in my memories even now.  So when I moved back the States, those things didn’t scare me the way they scare other people.  Those things created in me a way of looking at the world: just because it’s different or you don’t understand it, doesn’t mean it’s wrong.  Diversity, being open to different people and different places and different religions, that doesn’t make us weaker, it makes us stronger.

Third Culture Kids spent most of their childhood in a situation that is completely different than most kids around the world.  And at some point, Third Culture Kids end up back in the country of their passport.  In all honesty, my first couple of years back in the USA as a pre-teen were some of the hardest I’ve ever had, even to this day.  First of all, when we left Saudi, I knew I’d probably never see my childhood home again.  I knew I’d probably never see my friends again. I knew leaving, that I was really saying goodbye, forever.  And to an 11 year old, you can imagine what that felt like. We moved back to Medford, Oregon and those first few years, I felt like I had no one that understood the emotions I was feeling.  I had no one that understood what it meant to be uprooted, to be told that you’re American, but feel nothing of the sort.  My new friends couldn’t really understand that part of my life and people were asking me if I had ridden to school in Saudi on a camel.  No one understood.  But in that experience, while painful, it taught me something.  In those moments when you’re tested, you learn to adapt.  You learn to be flexible.  You learn to move forward and figure it out as you go.  Third Culture Kids will always be flexible, change won’t be as hard for us as it might be for others because we’ve had to be flexible since early on in our lives.

If diversity is a trait that I think is perhaps the most important to Third Culture Kids, the second most important trait that we possess in general is our compassion.  We’ve been outsiders, some of us for most of our lives.  We’ve been different.  We’ve been misunderstood and we’ve felt like the outcasts.  People always want to point the finger at other cultures if they don’t understand them.  I can’t tell you how many times in my life I’ve heard derogatory comments towards Arabs, often times from people who know about my childhood spent in Saudi Arabia and are fully aware of the reaction they’ll get from me.  But they say it anyways.  And honestly, I spent almost 12 years of my life as a little white girl with blond hair and blue eyes in Saudi Arabia and I felt more embraced in that country than I have in several situations in my life in the United States, in the country of my passport.

It’s interesting to me that over the years as I’ve gotten older and more educated, how many times I’ll be sitting next to someone at a dinner or meet someone through something and they’ll just launch into all their ignorant and aggressive feelings toward anyone that looks different than they do.  And I can’t keep my mouth shut in those situations.  My response is often met with shock when I mention that I actually was born in Saudi Arabia and spent my entire childhood there.  The first question always is, “didn’t you feel unsafe there?”  And my answer always is, “no, never.”  The truth is, I was embraced by my birth country, I was taught that different doesn’t mean bad.  I was taught that the call to prayer is just as beautiful as praying to God.  I was taught that while I might not have looked Arab, that didn’t make me a target.  I might not be Saudi, but the Saudis embraced me all the same.

As I got older and started teaching Interior Design at the Art Institute of Portland, I actually had many Saudi students in my classes.  And when I would tell them that I was born there, that I grew up there, many times in very short distance to where they grew up, their faces lit up and they embraced me as one of their own.  I’m not Saudi, I always was an outsider just by the way I looked but I think the Western world can learn a lot from the fact that even though I was different, I didn’t feel like I was because of the compassion I was shown by a culture that many would aim to destroy.  Third Culture Kids will show compassion, we’ll accept everyone because, we ourselves were accepted even as outsiders, even when we looked different or spoke differently.  We know what it feels like to be an outsider and we’ll be more compassionate later in our lives because we know what that feels like.