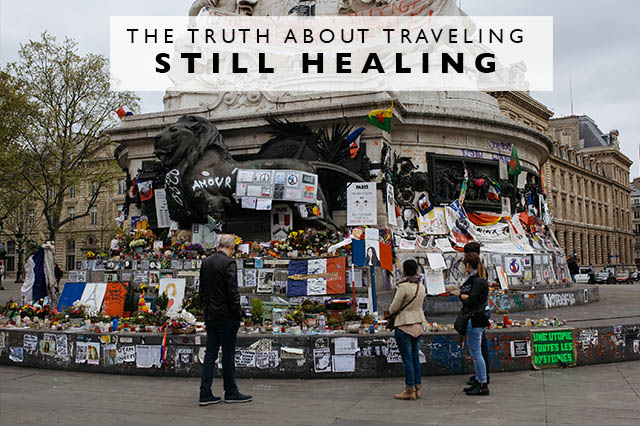 As we were wandering around Paris a few weeks ago, we wandered through the Place de la Republique.  Around the monument in the center of the square were flowers, candles, photos of people and banners written in spray paint and pen.  As we got closer we realized it was a tribute to all those affected by the terrorist attacks in Paris and Brussels in the past few months.  And it struck me in the moment, as much as the city and the world seem to have moved on, as we go about our busy days, as we enjoy long leisurely lunches in cafes along Parisian streets, we’re really still healing.

While traveling, I was informed that a family friend told a family member of mine that they couldn’t believe that they’d let me go to Paris after the recent attacks.  To be honest with you, the first thing I thought in the moment was, how ignorant!  How close-minded, how backwards that as humans we’d let our fear, our closed minds get in the way of experiencing our planet, of living a life of freedom, going where we want to go and doing what we want to do.

And as I stood at that monument in La Place de la Republique, the sadness of the city, the heartbreaking pain of what Paris and Brussels and all those other places have endured due to terrorist attacks, it was overwhelming.  I was seeing it with my own eyes, I was standing there with the Parisians, I was griving with them, supporting them, standing there on my own accord, with my own two feet.  And so when ignorance arises and people let that fear cloud their judgement, it gives those who would take our freedoms away just a little bit more power and that’s exactly what they want.

After all, how can we know what it’s like if we don’t open our minds?  How can we grieve with a city, with a planet if we don’t ever let ourselves see the devastation, if we don’t ever let ourselves see what’s happening on the other side of the world?  How can we solve our problems and hope for a better world if we’re never open to seeing what’s in front of us, to stand in a square in Paris or Brussels or Istanbul and to see with our own eyes, think with our own minds?  The truth of the matter is that fear is only as real as we make it, terrorists only have as much power over us as we give them and I for one will never stop seeing the world to give in to their antiquated fear.  I for one will continue to roam the world, I’ll continue to stand at monuments like that in Paris and support my fellow humans, to cry with them, laugh with them, grieve with them.  I will forever be searching for ways to better our world, forever standing side by side with my fellow citizens of the world because if we can’t support each other when we need it most, what’s the point?

We’re all still healing, but we can start by standing together and not letting ignorance tear us apart.