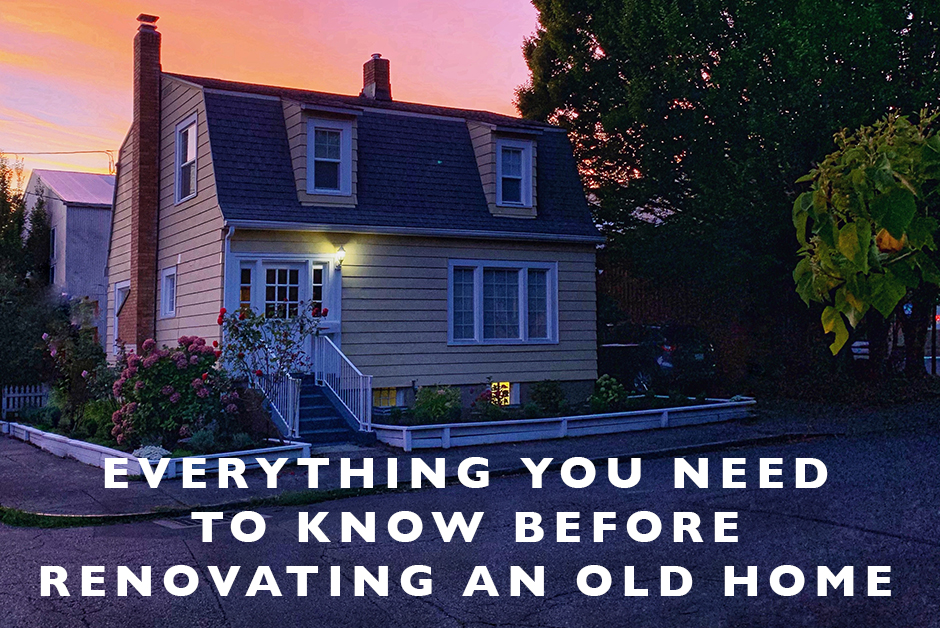 One of the things that a lot of readers have asked me over the past several months is to share more about the process of renovating our 1925 Dutch Colonial house that we purchased a year and a half ago in Portland.  To be completely honest, the renovation of this beautiful old house has been both extremely fulfilling and completely overwhelming.  It was always a dream of mine to renovate an old house and I’m so glad that we did this.  And while I’m not sure how long we’ll be here (we’re thinking of selling in the next couple of years as we usually do after flipping a property), the process has taught us so many lessons!  Some are things that I figured before we bought it, but some lessons were totally out of left field.  Today I’m diving into everything you need to know before renovating an old house and some of the things I wish I would have known before we embarked on this adventure!

Don’t go into it blindly.

Truthfully, I’m in the design and construction business for my day job as an Interior Designer so I thought I had a pretty good foundation for what we’d be looking at when renovating an old house.  But I still think that we romanticized the process a bit more than we should have and were a bit naive.

The first thing that I think is vitally important and one thing we did do, which I’m so glad we did, is be really careful when buying an old house.  Make sure you get a really good inspection done before buying and that there aren’t structural or other really costly issues going in.  And if there are, do your due diligence and figure out how much that is going to cost to fix before you sign on the dotted line.  Some of those issues can be really expensive and will blow your whole renovation budget before you even get to live there.

We were really lucky in that even though our house was built in 1925, structurally it’s really sound and a lot of the major issues in old houses, like old siding and roofing, had already been redone before we bought it.  That alone saved us thousands of dollars.  So don’t go into it blindly and know that it’s going to be a lot of work and money either way, but you can save yourself a lot of heartache and money by doing your due diligence before buying.

A project will never be cut and dry.

No project we’ve embarked on in renovating this house has gone as expected.  Every single one has brought with it new challenges, changes and fixes to other problems that arise while working on the first problem.  You will learn you just have to go with it.  And always expect something else to come up while working on projects.

It will take much more time (and money) than you expect.

Adding to the point above, every project you embark on will end up taking longer and more money that you expect when starting out.  Each project we’ve tackled in our renovation has added a whole lot of extra time and money.  From finding additional issues that take more time to solve or learning as you go and making decisions that end up changing the look or function of the space, you’re most likely going to have to add time and money to fix the issues that arise.

Nothing will be even or straight.

I’m not sure that there is a true straight line in our house and that’s typical of most older houses as these houses were being built entirely by hand.  Our walls aren’t straight, flooring isn’t even.  It doesn’t bother me so much, but some of this stuff really bothers Nick.  You have to know going in to renovating an old house that nothing will quite match up or run straight and you just have to learn to be ok with that.

You’ll learn as you go.

The one thing that I will take away from our time renovating this house is how much I learned.  I learned to tile here, I learned to grout and scrape old paint and how to fill old wood floors (post on this coming soon!).  I learned a ton of DIY skills in this house to help cut the cost and those experiences I’ll always keep with me, long after we sell this house down the road.  I think the most important part of renovating an old house is to learn as you go, to pick up skills as you go.  Old houses after all are the culmination of many different people updating them over the years, morphing them with their own hands and ultimately becomes a collection of a lot of different people.  Learn as you go and hone your DIY skills as you go.

DIY is tricky on an old house.

While I personally have a lot of DIY stuff in this house, I have also learned that some spaces, DIY isn’t the best and you should hire someone who knows that they’re doing.  Things like electrical and demolition can be tricky in an old space.  We’ve hired out for all of our electrical, plumbing and major demolition and construction work to be sure that we’re doing it right and not adding more issues to our already long list of things we’re trying to fix.  It’s definitely worth the money to have the peace of mind when it comes to certain things.

Houses are a lot of work and upkeep, be sure you’re ready.

I think the over arching lesson we’ve learned while renovating our house is that no matter if it’s old or not, house are a ton of work and you shouldn’t take owning a home lightly.  On the surface it’s nice to have the space and a yard and a garage, but in truth, the more space you have, the more work it’s going to be.  I hate in our society that the “American Dream” is to buy a house, because in truth, not everyone is in the financial or mental state to own a home.  It’s a lot and you want to be sure you’re ready before jumping into it.  I’m sure this won’t be the only home we own in our lifetime, but next time around, I would definitely downsize and look at different things than we did with our first house purchase.  Be sure you’re ready before diving into the world of home ownership.