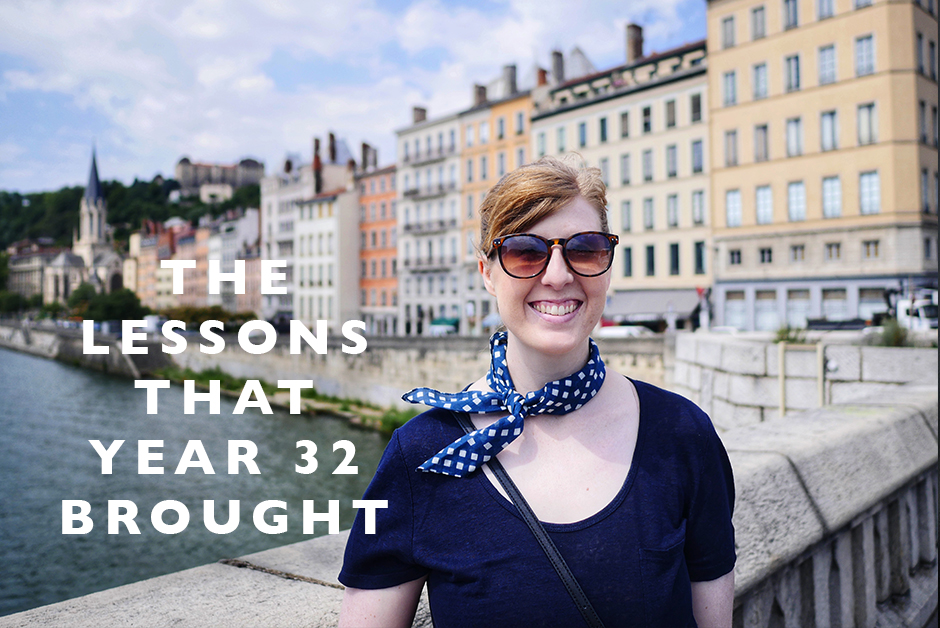 We are galavanting around New England currently and as I turn 33 today, celebrating in one of my favorite corners of the world, every year I like to look back on the previous year and see what lessons I learned.  I am finding that as I get older, the lessons become bigger and more challenging, life becomes just a lot sometimes and as we get older and the world changes, it become vital that we take stock of what is happening to us and learn the lessons that those issues bring.  So as I take on year 33, here is what I learned this year and what I’m bringing into the next one!

The Smallest Moments are Often the Largest

I found multiple times this year that while those large life changing moments like getting married or traveling somewhere exotic are incredible and really do leave lasting impacts on you, the smaller moments in life are often more important.  I’ve always been one to “stop and smell the roses” if you will, I try really hard not to take those small moments for granted, but one moment in particular stood out to me this year.  In August, we were in Southern Oregon for Nick to play in a golf tournament.  In the middle of a 90 degree day, the clouds rolled in and just dumped rain on us in the middle of the golf course.  I happened to be riding in a golf cart that day with our niece who just turned 4 and in the middle of this downpour, she looked at me and said “would you dance in the rain with me?”  And I just looked at her and said yes.  In that moment, that’s all there was, the rain, her and I, running around like crazy people in the middle of the golf course in the rain.  And you know what?  That’s a memory I’ll cherish forever.  Those types of moments were fleeting this year, I’ll admit.  But I hope that in the coming year, there are more of them.  I hope that I can continue to throw caution to the wind, take a leap of faith and not think so much.  Because thinking is often to the downfall of those types of memories, those types of moments.

What’s Right for Everyone Else, Might Not Be for You

We bought a house last year, and while it’s our third property we’ve owned, it’s our first stand alone house.  And don’t get me wrong, I love this house and I love what we’ve accomplished in renovating it and I love the character and the story behind it.  And I’m so so grateful that we were able to buy it.  But, I’ve realized this year that even though so many people in our circles were over the moon when we finally bought a real house, it’s just a lot for us.  The upkeep, the expenses, the yard work… for our lifestyle and schedule, it’s proven to be just a lot.

I’ve had so many people try to talk me out of selling the house in the next couple of years, telling me that we’ll grow into it, that it’s not really that much work, that I just don’t know what I’m talking about.  Well what I’m talking about is what I feel.  I feel like it’s too much, I feel like I would like a smaller home with less time spent on upkeep, I feel like I’d rather be spending my money traveling.  And you know what?  That’s ok.  What is right for them, might not be right for me and while I’ve learned this lesson over and over in my life, this year it really hit home.  It’s ok if what’s right for you is different and you just have to be strong enough to be ok with that.

You are Capable of Anything, Even When It’s Hard

This year was an adjustment in a lot of ways.  I’ve had lots of family situations in flux this year and I leaped and started a macaron business this year which was totally different than anything I’ve ever done before.  I did way less design than I have in years past and found myself having to start over with getting new clients in Oregon, after working almost primarily in Hawaii for 10 years.  And all these changes, all these new beginnings, it’s not been the smoothest of years.  But you know what?  I know myself better and I know that I’m capable of anything, even when it gets hard.

Life just gets crazier as we get older, as our responsibilities get bigger and we have to believe in ourselves.  If we don’t, it will only be harder.  So believe that you’re capable and the strength will come.

Get Used to the Chaos, It’s Not Going Anywhere

Gone are the days of restless freedom, of the time to accomplish all those random things you wanted to.  Gone are the days of no worries, the days when we had nothing on the schedule or a never ending list of to do’s.  I’ve come to terms with the change over time, but the honest truth is, life is chaotic, the world is chaotic.  I fully realized this year the value of time and honestly it made me reevaluate what I want going forward.  It’s one of the reasons why we decided to stay in our house for a shorter amount of time than we had originally planned.  I realized that we only have a finite amount of time, only a finite amount of weekends to get stuff done, a finite amount of evenings without stuff on the calendar.  And you know what?  I’d rather spend those empty slots of time doing things I love.  I’d rather use that spare amount of time seeing a new place in the world or just laying on the couch watching a show we love without thinking of the endless amount of things to get done.  The chaos will always be here, but it’s about creating a life where the chaos is somewhat managed instead of not acknowledging it all.