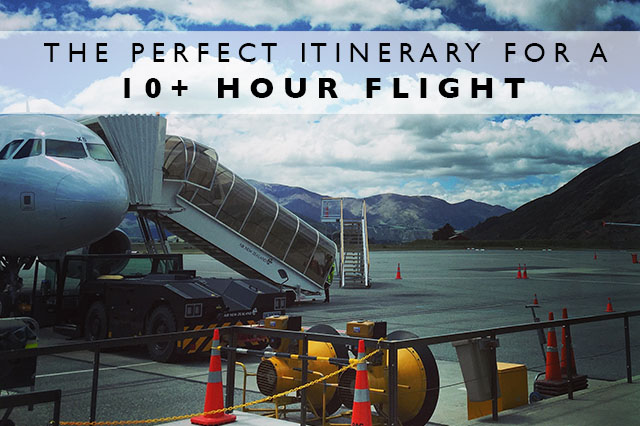 A while ago, I had a reader reach out mentioning they have a hard time figuring out how to pass the time on long haul flights.  And after our trip to Australia where the flights from the West Coast of the US were a solid 14 hours each way, I figured it was a good time to show you my perfect itinerary for a 10+ hour flight.

Boarding – I like to board at the beginning and usually with elite status and such, I board with the group I fit into.  I like to get settled and not be rushed.  This is also a great time, once you get to your seat, to get yourself all situated.  I take out things like my phone and headphones, chapstick and water so that I have everything out that I’ll need during take-off.

Take Off – I usually listen to music during take-off so during taxi, I’ll figure out what I want to listen to and get everything ready to go.  Then I put the headphones in and watch the land disappear beneath the plane out the window.

Hours 1-3 – Depending on my mood, I usually like to get some stuff done during the first few hours of a long flight.  Whether that’s working on blog posts (I use my phone and a bluetooth keyboard for that) or other work related items, I find that if I need to do anything, I am the most productive during the first few hours.  Also use this time to eat the meal that is usually served in the first hour or so of a long flight and continue to organize your seat and area.

Hours 4-6 – I can sleep fairly easily on long flights, so after I get done what I need to, I’ll nap for a bit.  Sometimes that’s a solid few hours of sleep, other times it’s a half hour here and a half hour there, but the middle of the flight is a great time to get some rest as usually they turn down the lights at this point and you want to make sure you’re rested as traveling is draining.

Hours 7-10+ – If I wake up fairly refreshed, I’ll head to restroom and splash some water on my face.  I usually also head back to the galley at this point of a flight and get some tea from the flight attendants.  And then heading back to my seat, I’ll spend the next few hours of the flight either watching movies or tv shows on my phone or on the entertainment systems of the plane.  I like to do this last because it passes the time quickly and usually at the end of a long flight, those last few hours drag on and on.  But when you’re immersed in something you’re watching, it goes by a lot faster!

45 minutes before Landing – I usually take my make up off for long haul flights, so if we’re landing at a destination, I’ll head to the restroom about 45 minutes before landing and reapply a little bit of makeup and freshen up a bit.  That way, I feel much better and we can hit the ground running!