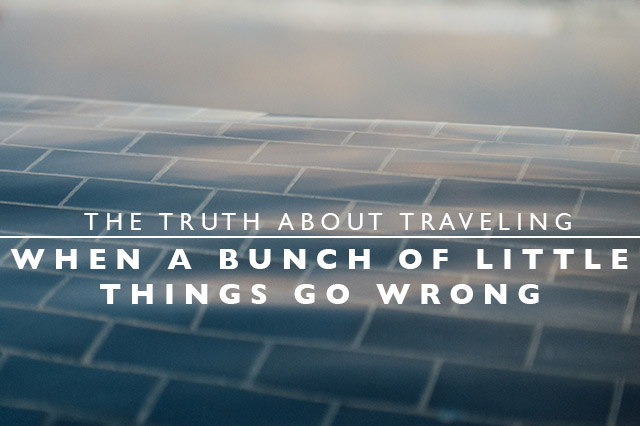 We’ve all had those trips where major things go wrong: flights are canceled, hurricanes detract our travel plans or we’re sick or have an emergency and can’t go, etc.  And those are horrible and can ruin a travel experience.  But on the other hand, there are also some trips when a bunch of little things go wrong which can add up to really upsetting a trip as well.  Such was the case for us our last day in Mexico.

To recap…when we awoke on our last day in Mexico, we were hoping to head into Cabo San Lucas to experience both towns of Los Cabos during our stay (we had gone into San Jose del Cabo the day before) and had asked for late checkout the afternoon before.  The concierge assured us it would be fine and if it wasn’t, he’d call us Sunday morning.  So we got up and went to the pool, then to breakfast.  By the time we got back to the room is was about 10:30 and we hadn’t heard from him, so we called the front desk to confirm it was alright.  Well, either he didn’t arrange it or tried and couldn’t and didn’t let us know.  Long story short, we were left scrambling to shower, get ready, pack up everything and be checked out by noon to then have 4 hours to kill before we needed to leave for the airport.  That started the day off.

Then as we were checking out, the hotel was charging us for breakfast each morning (which by the way was $75 per day, another issue I had with the hotel), and we had been told that was included in our rate.  So after a little back and forth, they finally took those charges off and we headed to the taxis to head into Cabo San Lucas which we didn’t like.  Keep in mind at this point it was about 100 degrees with humidity and we were completely drained from the heat and the experiences of the morning.  Then we came back to the hotel and after waiting about 20 minutes for our ride to the airport, I had my phone in my right hand and tripped on a stair and went falling forward, landing on my phone, which is turn cracked the whole screen.

Finally upon landing in San Francisco (on our “direct” flight to Portland, which is another issue we had with Alaska Air on this trip, that because you fly the same plane from Cabo to San Francisco and then on to Portland, they call it “direct” but don’t tell you when you book that you actually have to get off the plane going both directions and wait a few hours), we got off the plane to find that our boarding passes didn’t work at the TSA precheck security line (since they said Cabo to Portland and didn’t mention San Francisco), so we had to go back through the normal long security lines and then proceed all the way down to the end of the terminal for the plane we had already been on.

At the end, I realized that a bunch of little things going wrong can end up really adding up and ruining a day or a whole trip.  It’s one of those things that you can’t control and just have to make the best of it, but at the end of the day, you have to realize that that’s travel and that’s life.  Nothing is ever going to go right all of the time, which makes us appreciate it when it does.  But it’s also better to be prepared for everything that could go wrong.  By the time we were on the flight bound for Portland from San Francisco, we were laughing at all of the things that had happened that day, partly due to being exhausted but also knowing that we were home bound and tomorrow is a fresh start.  So when everything is going wrong, just take it in as best you can and look ahead to better times.