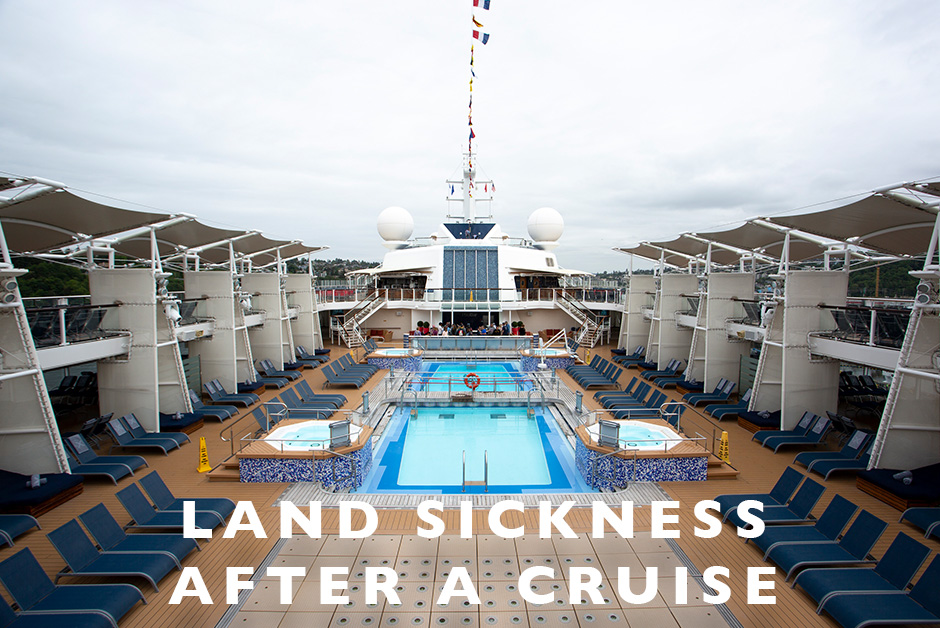 Travel isn’t always perfect and not everything goes according to plan.  I’ve had numerous trips that we look back on now and laugh about how horrible they went, about how sick we were or about how many things could possibly go wrong all at once.  And as travelers it’s important that we’re honest about things and let others know that while amazing, travel can also cause problems and add stress to your life.  Such was the case for me on and after our cruise to Alaska.  I read hundreds of cruise reviews in the lead up to our trip and worried about getting sea sick on the cruise, so I brought Dramamine.  Thank God I did, as I did get severely dizzy and light headed a couple days into our cruise, but with rest and Dramamine, it subsided and I was fine the rest of the cruise.  Not to say I felt amazing, I didn’t.  The vibrations of the ship really bothered me and while the major dizziness faded, I definitely had a little bit of it the whole time.

Fast forward to about 4 days after we were home, off the ship and back to our normal lives.  I suddenly was getting spells of intermittent dizziness again, alongside a major brain fog and fatigue.  It was hard to concentrate and while my vision was alright, it just felt off.  I was seriously contemplating calling my doctor one day when I remembered something my Grandma had said about a friend of theirs years ago that had something called Land Sickness after disembarking from a cruise.  I immediately looked it up and after seeing it’s a thing realized that a lot of people get this but yet, when I was researching and talking to people about our cruise beforehand, not one person mentioned it.

Land sickness is a type of vertigo, yet instead of standard vertigo that is caused by the crystals of the inner ear, land sickness is caused by the brain, essentially your body and your brain are fighting to determine if you’re back on land or still at sea.  The brain fog, trouble concentrating, fatigue, a rocking sensation and dizziness are all common side effects of land sickness.  With further research, it’s totally different for everyone and the symptoms may range in strength as well as length.  Ultimately, they don’t know much about it.  But in an effort to bring awareness to something that not many people know about and something that affected me for weeks after our cruise, here’s what I know and what I did to help my symptoms go away.

You can get land sickness even if you don’t get sea sick.

From what I’ve read, some people who may never even get sea sick while at sea can still get land sickness.  So don’t write yourself off just yet – you potentially could still have this form of vertigo after getting off a ship even if the whole time on the ship you were totally fine.

Land sickness can last anywhere from hours to days to weeks, depending on the person.

Again from what I’ve read, land sickness can vary drastically in length depending on the person.  Some people only have it for a few hours, others have it for weeks like I did.  Sometimes it can last years if you have MDMS, which is a severe form of it. In truth, it’s really frustrating because you don’t know how long it’s going to last and you just kind of have to ride it out.  Mine ended up lasting a full two weeks after disembarking from the cruise.

Dramamine did help me, even though most people said it didn’t help them.

Everything I read in forums mentioned that Dramamine probably won’t help with land sickness.  I did find it helped me and I took 2 Dramamine tablets every day for a week or so and that seemed to help.  Apparently if you take Dramamine right when getting off the ship for a week, it helps to lesson the effects.  I didn’t know about any of this when we got off the ship and so mine didn’t actually start until 4 or 5 days after we got home.

You just have to give it time to heal on its own.  If it’s not gone in a few weeks, see your doctor.

Everyone says, you just have to let it go away on its own and let your body’s own internal system fix itself.  There is no rhyme or reason to why it goes away or stays as long as it does and everybody is different.  But if it’s severe enough that it’s hindering your life, make sure you see your doctor.  Mine was never bad enough that it stopped me from doing anything, I just felt as if I needed to alter my schedule a little bit and give myself more time if I needed to lay down for a bit when I got really dizzy.  But gauge your situation and figure out if you need to see a doctor or not.

Vertigo is very much a mystery and different things work for different people.

Vertigo in general as I’m learning is still a huge mystery to the medical community.  But whether standard vertigo dealing with the crystals in the inner ear or land sickness, both can be extremely debilitating and have a horrible effect on your mental health as well.  It’s important that each person finds what works for them and from others I’ve talked to, each person is totally different.  Some say certain foods are triggers, other say Xanax works for them to curb the dizziness, others say ice packs on their neck or shoulders.  For land sickness, walking or driving can help ease the dizziness and sleeping long nights can also help with the fatigue.  You have to find what works for you and often times, it can take a lot of trial and error to get to that conclusion.  Hang in there though, for most people, land sickness and vertigo go away on their own after a specified amount of time!