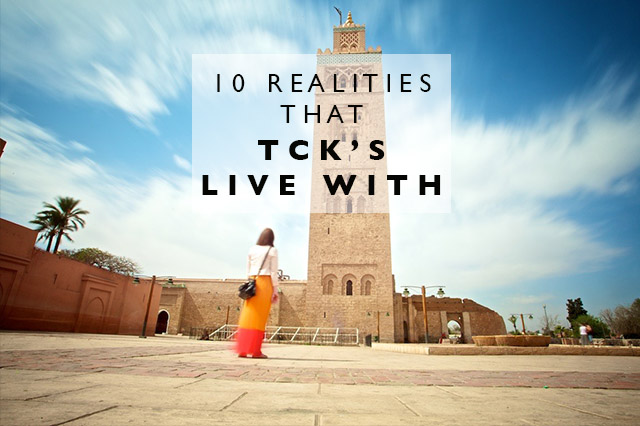 If you’re new here or not aware, I grew up in Saudi Arabia.  I was born in an Arab hospital in Dammam, Saudi Arabia and lived there all throughout my childhood.  It was home.  It wasn’t until years later as a teenager in small town USA that I came across the term Third Culture Kid (TCK) and my life was changed.  Suddenly I had a word that described everything I was feeling and I could connect with other TCK’s all over the world that were feeling the same emotions I was, that were struggling with the same challenges I was facing.  As I’ve gotten older, while being a TCK will always be my identity, I have realized that it’s not as much a part of who I am as it used to be.  But every now and then something comes up that I just have to stop and take it in, I’m a third culture kid and always will be and there are certain things that will always affect my life because of my childhood abroad.  So if you’re a TCK, you’re not alone and if you’re learning the term today, then here’s 10 realities that TCK’s live with each and every day of their lives.

A lot of people here my story of growing up in the Middle East and ask a million questions but what they never seem to grasp is that while the majority of Americans can always go back and drive by their childhood home, or go back to Christmases or Thanksgivings, I’ll probably never have that opportunity.  Not only is the Middle East in chaos right now, but Saudi Arabia is particularly hard to get into even for holiday.  And even if I could, I probably wouldn’t be able to get back onto the compound I spent my childhood on.  It’s something I learned to let go of at a young age.

2. We get tired of answering the question, “where are you from?”

This used to make me so irritated, less so now, but still, this question is a hard one for third culture kids to answer.  On the one hand I was born and spent my entire childhood in Saudi Arabia, but I’m not Arab.  And while I’m American and have spent my young adult life here, there were many years I didn’t really feel fully American either.  It’s a division of worlds forever.

3. We lack the exact words to describe what being a third culture kid really feels like.

It’s really hard to exactly describe what we go through and how we feel to someone who doesn’t understand.  So when you meet someone who has been through a similar experience, it’s an instant connection.

4. We get asked over and over if we speak the language of our birth countries.

If I had a penny every time someone asks me this.  I actually was asked this just a few weeks ago coming home from Amsterdam when the guy at security asked me (after seeing Saudi Arabia as my birthplace on my passport) and we actually got into counting to 10 in Arabic together.  I don’t speak Arabic, but I can still count to 10 and say hello and thank you.

5.  We hate normal, we embrace diversity.

I love diversity, I love seeing people of all different backgrounds in a room.  I hate normal, I hate the normal route, I always want to try and be different.  I think a lot of that has to do with my childhood.  It’s engrained in me this sense of embracing different things and looking for diversity.

6.  We embrace moments differently than most.

Over the years I’ve realized that Third Culture Kids embrace every day moments a bit more than kids who grew up in their home countries.  We tend to be overwhelmed by routine moment more than most, seeing the beauty in the everyday.

7.  Memories take hold suddenly and at the most random times.

My mom still catches herself saying this weekend on Thursday and Friday (which were the Saudi weekend days when we lived there) and sometimes I get such a craving for a schwarma that I can hardly stand it.  Memories come at random times and come on so strong that it’s almost as if I could be back there.

8.  Home means many different things to us.

Home for me for many years was a fluid concept.  Finally I found a true home here in Portland, but it was years and years of struggle with the idea of home.  What I’ve come to realize is that home doesn’t have to be a place, it can be a person you love or an idea.

9. We tend toward acceptance of many different cultures.

I get really angry when people say ignorant remarks in front of me regarding different cultures.  And while yes, they may not be aware of what they say and the affects of it, it’s still ignorance.  As a third culture kid, I’m incredibly aware of how harmful ignorance can be.  The things people have said to me about the Middle East over the years, some of them I’m completely shocked that people can even think those things about other human beings.  Third Culture Kids grow up in a foreign society, so we learn at a young age we’re all more alike than different.

10. We still feel different when in a crowd, still feel like we somehow don’t belong, but at the same time we know that’s ok and we’re proud of who we are.

It took me a long time to really come to terms with what being a third culture kid means and to be proud of it.  I spent a good deal of my teenage years struggling with a lot that being a TCK meant, but it wasn’t really until I started traveling again and seeing other cultures and seeing the world that I really found in my heart how proud I am of Saudi Arabia as my place of my birth, of what that means for me and how it’s made my life different.