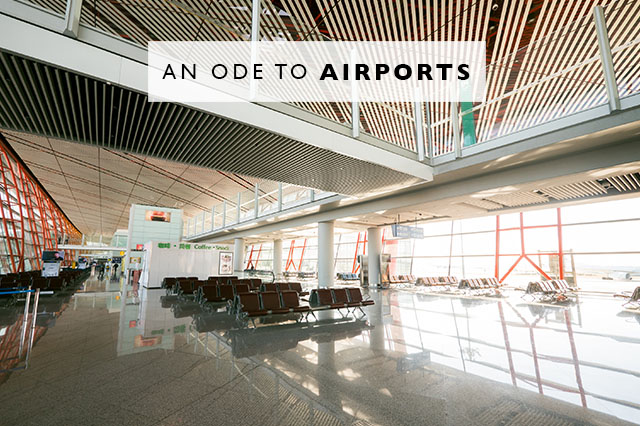 There is something magical about the allure of heading to a far away place, of packing for a weekend, or a week or longer, of knowing that in so many hours you’ll be some place different, perhaps some place you’ve never stepped foot in before.  And while the allure of travel is often left alone to long flights filled with gazing out of windows at sunsets 30,000 feet above the Earth or watching the night sky come alive with stars against the black darkness all around, while the allure of going someplace is often left to that magical moment of arrival in a foreign place… we often forget about a fundamental piece of our travels, that gateway between where we begin and where we end up: airports.

I often get asked if I enjoy the act of travel, no, not the gorgeous places on the other side of the world but the actual act of getting somewhere.  I often get asked if I like spending so much of my life on airplanes and in airports around the world and the honest truth is: I adore it.  I’m not sure if my affinity for airports began as I was traipsing around the world as an expat kid with my family or if it’s been an acquired taste after so many years of travel, but either way, I love airports.  I love the feeling of arrival, both the arrival at an airport in my hometown, knowing that in the hours to come something amazing is coming.  I love the feeling of arrival when I step off the plane somewhere far away.  I love the feeling of that chaotic frenzy at airports, people from all over the world, converging into one structure, the excitement, the busy-ness, the allure of something we’re all trying to reach.

Airports are a hub for some many different types of people, and I think in a lot of ways, that’s what draws me to them.  A place where it doesn’t matter where you’re from or who you are, but that for a brief few hours, we are all in the same place, all with the same goal to get somewhere that we need to be.

And yes, the food is usually not great and the stress that travel often brings can often be a downside for some to spend any extra time at the airport than they need to, but for me, I actually don’t mind spending a couple extra hours in a terminal somewhere, watching the people around me and imagining where everyone is flying off to.  Airports are a network of dreams, connecting people to places in a way that we often overlook.

So the next time you’re spending a layover wishing your flight would leave sooner, look around.  Look around at the couple heading off on their honeymoon, or the college kids heading to Europe for the first time.  Look around at the family heading home after a long time away, or the business man heading home to his family.  Airports are the modern way of connecting us, both figuratively and physically.  We are all doing the same thing in airports, leaving somewhere and going somewhere, so whenever you’re headed somewhere next, try to embrace the beauty of the act of travel itself just as much as the destination.