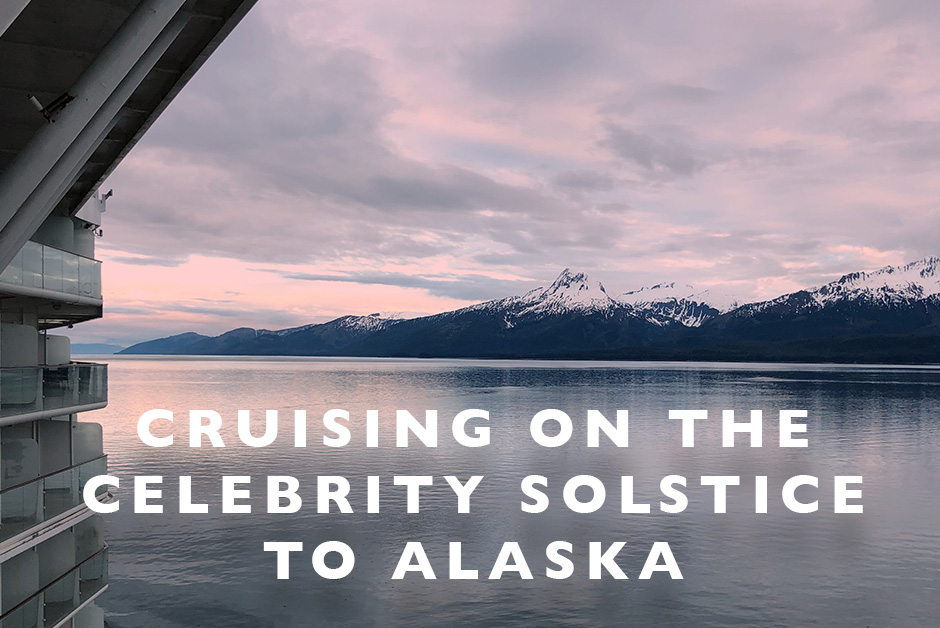 Last year when we were looking at our 2018 itinerary, we really wanted to get back to Alaska after falling in love with the state a couple years ago when we traveled to Anchorage and the Kenai Peninsula.  We’ve always heard amazing things about cruises to Alaska, so we decided to give cruising a try!  A lot of people that know us were really surprised to see us doing a cruise and were really interested to see how we would like it.  In the end, I’m not sure I’m a cruise person for the long run, but we enjoyed different parts of cruising to Alaska and didn’t enjoy some others.  We decided on the Celebrity Solstice cruise from Seattle which took us through Ketchikan, Juneau, the Tracy Arm Fjord and the Inside Passage, as well as Skagway and Victoria, BC.  Here below is my honest review of our first time cruising to Alaska, what I loved and what I didn’t while cruising on the Celebrity Solstice to Alaska.

Views from our Balcony – One of my favorite parts of the whole experience was being able to see so much amazing scenery from the privacy of our own balcony in our stateroom.  Our balcony was large and comfortable, and had some of the best views we’ve seen.  From up close at Dawe’s Glacier to the incredible scenery of the Inside Passage, the best view for us was never more than a few feet from our room and we didn’t have to push through a whole bunch of other people to get a good view or an amazing photo.

Tuscan Grille – Our first night on the cruise we ate at Tuscan Grille, one of the “pay for” restaurants on the ship.  If you’re not familiar with cruising, at least on Celebrity, there are a handful of restaurants that are included in your package and then there are a few specialty restaurants that charge a cover fee (ie $45/person for everything included).  Our ship had 3-4 specialty restaurants, one of which was the Tuscan Grille, a rustic Italian spot.  We ate our first dinner on the ship here and lunch on the last day and it was fantastic both times.  We were blown away by the quality and the offerings at Rustic Grille!

Comfortable Room + Storage – We upgraded to an Aqua Class room which gave us a little more space and a lovely balcony, along with some other perks like access to Blu and fresh tea and fruit in our room every day. The room was really comfortable and we had lots of space to store all our items all week.

Amazing Service – The item that I’d say was perhaps the best of the cruise was the service.  The staff the whole week was amazing and I have nothing but great things to say about the entire staff on the Solstice!

The Captain – Perhaps a weird thing to include but I couldn’t not mention him, the Captain of our ship was so hilarious that every time he came on the loud speaker we were dying laughing.  His hilariously dark sense of humor added a lightness to each day when he gave his daily briefing!

What I Didn’t Love

Not being able to explore each destination very deeply – One thing I missed on a cruise was the ability to explore as deeply and as long as we wanted in a location.  While most of our trips are fairly short, we are still able to really explore a place deeply and do it on our own schedule.  On a cruise, you’re limited to a specific amount of time in a place and we found it a little limiting.

Bad Wifi – We weren’t sure what to expect as far as connectivity while on the cruise and we kept our phones on airplane mode unless we were in a port the whole time.  As far as wifi goes, the wifi on the ship was pretty bad and was really expensive.  Nick and I both thought we’d have much better connectivity to work while away and it ended up being pretty limited.

Nothing opens early on the Ship – Nick and I both get up pretty early (5am most days) and nothing opened earlier than 6:30am on the ship.  We found ourselves sort of waiting around most mornings until restaurants or coffee shops opened up.  If you’re an early riser, you might find it hard on a cruise ship.

Sea Sickness – The first open sea day on our cruise, I got a light bout of sea sickness and while I don’t get sick, I did get incredibly dizzy to the point that I just had to lay down for a while.  I took a dramamine and napped for a few hours and then was totally fine the rest of the time, but it definitely didn’t start the cruise super great.  I’ve been on other smaller boats in much rougher water and never had an issue with sea sickness, so even if you aren’t prone to it, pack some Dramamine before you do a cruise either way!

Age gap on Cruise Ship – When we booked this Alaska cruise we knew we’d be the rarity in terms of age as the Alaska cruises tend to lean toward an older generation as the prime demographic.  And that definitely was the case.  Most of the activities and music and such was geared toward an older generation and we definitely felt the age gap throughout our time on the ship.

So much food – I’ll be honest, I am not one to shy away from food and love a good meal, especially when traveling but even I was feeling a little weary of so much food at the end of our cruise.  Because the restaurants are only open at certain times of the day, we found ourselves having to schedule out three meals each day and each was not super light.  By the end of the week, I was ready for a full on detox when we got home.  On another note, there wasn’t a ton of options for really light or healthy food, especially fresh vegetables which I really missed the whole week!

Notes to Keep in Mind

Upgrade to a balcony room – By far the best tip I can give, upgrade yourself to a room with a balcony.  It will completely change how you get to see the scenery… it’s well worth the extra money.  And also, having access to fresh air and looking out at the horizon was a huge help for me the day I was a little sea-sick.

Buy a Dining Package – In retrospect, I would have bought a dining package when we booked the cruise now knowing that we liked the pay for restaurants so much.  We also bought a non-alcolholc beverage package for Nick before boarding, which was great for him because he drinks a ton of sparkling water, but I found I didn’t need one for me but would have liked to have had a dining package to take more advantage of the specialty restaurants.

And stay tuned in the coming days for a post all about what I wish I would have known before cruising to Alaska for more tips!

Would I do a cruise again?

After my first cruise, a lot of people I know have been asking what I thought and if I’d do it again.  In the end, I am glad we did this cruise to Alaska and we got to see a lot of the Southern Alaskan coastline that we might not have gotten to any other way except on a cruise.  Would I do an Alaska cruise again?  Probably not, once I think is enough.  Would I do another cruise elsewhere in the world?  Maybe.  I think that certain places in the world it might be well worth doing another cruise.  I would consider a cruise along the coast of Norway or perhaps a river cruise in the Amazon.  But in general, I think I’d rather plan my own travels and be more on my own schedule in general.

Are you headed to Alaska?