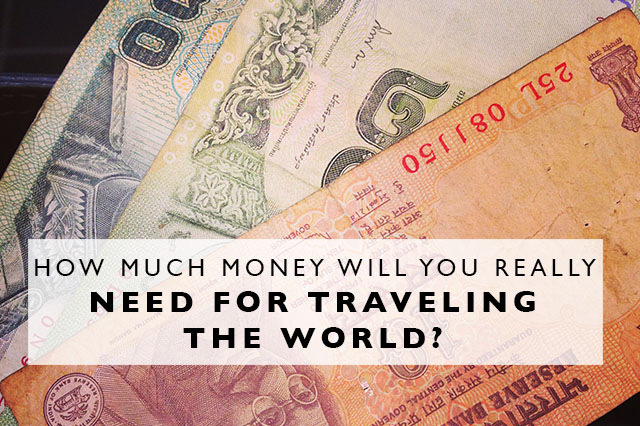 Money makes the world go round, but how much will you need to get around the world?

In an age where things are continually becoming more and more expensive, is it really possible to travel the globe on a modest budget?

The general consensus appears to be no, with this guide suggesting: “you should take the amount of money you think you’ll need and then double it – if you’re going to get by”.

When you think about it, that makes a lot of sense. Given mass inflation, in the UK alone it costs as much as £179 ($236) just to get from one end of the country to the other (travelling from Exeter to Newcastle) – and that’s without taking food, accommodation and other expenses into account.

Naturally, there’s no one exact price you can slap on a holiday which encompasses an entire world trip. There’s a lot to do out there, with price ranges varying drastically.

Saving Money on Food and Accommodation

To bring down the costs to as little as possible, it’s probably best to try and find as many free activities as you can. There’s a lot out there you can do for free, no matter what country you’re in.

That said, free days out won’t see you through forever – and most of the top tourist attractions you’ll want to visit certainly aren’t going to be cheap.

Similarly, with food and accommodation, you’re going to need to weigh up whether you’re happy to forfeit comfortability and high quality, for budget-friendly locations and grub.

Cheap food can cost just a handful of coins for a meal, but when it comes to what you’re putting in your body it isn’t always wise to skimp out. Nutrition on a long journey is important, so make sure you’re getting plenty of fruit and veg.

Saving Money on your Flights

All of that is before you take the likes of the actual travel itself into account. While some journeys aren’t going to break your budget, it’s impossible not to catch flights at certain points in your trip.

Expenses in this department could reach as high as $2,495 to $3,480. Let’s face it; flying around the world, even on some of the cheapest flights available, isn’t cheap.

When all is said and done your estimated cost is probably going to be a figure which most people will not be able to casually afford (at least not without a good deal of saving).

When the average costs of food, travel, accommodation and other expenses are taken into account, it works out you’ll be paying roughly $25,000 to traverse the globe – while maintaining a good standard of living.

Unsurprisingly, it isn’t cheap to see all the corners of the Earth. But, if you’re dedicated enough, then start saving today and you could witness some of the best sights the world has to offer. Our planet provides a simply brilliant experience for anyone brave enough to venture out there – and from Peru’s incredible Machu Picchu to the stunning setting of Ayers Rock, you’ll love every minute.

This post was contributed by supporters of Land of Marvels.