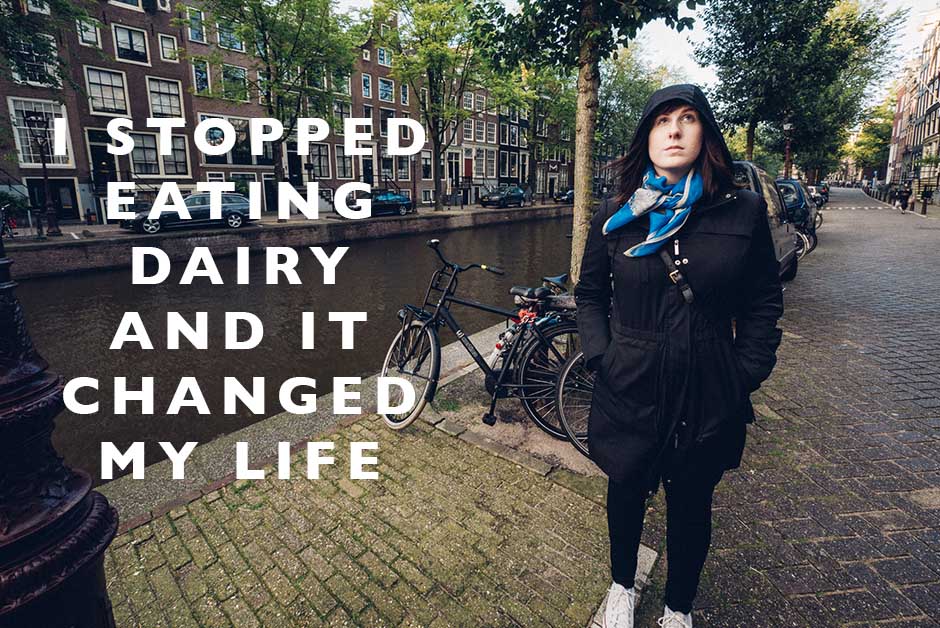 One of the things that I’ve heard from a lot of my readers is that you want to hear more personal stories from me, highlighting things in my everyday life and not necessarily just travel-related.  And as I get back into regular posting here on LOM, I’m delighted to let you know that lots of personal posts are on the way, starting today.

I have shared a little bit about some of my health struggles in posts here and there throughout the last couple of years, but in truth, the past few years have been a bit of a struggle for me health-wise and I haven’t really shared the whole story.  So before I get to the diary free part of the story, I need to go back a little ways and explain what was happening that led me to going diary free today.

The first of my health issues was that ever since I was a teenager (15+ years now), migraines were part of an almost everyday occurrence.  What started as regular cluster and migraine headaches as a kid, turned into Aura Migraines as I got older and first of all, those that suffer from migraines know that a “regular” migraine is bad enough.  I would get them at all hours and they would debilitate me to the point that I would just have to lay down in a dark room with a cold wash cloth over my head and try to sleep it off.  I tried medications but they never seemed to get to the root of the problem.  They got so frequent that in high school I had an MRI to confirm I didn’t actually have blood clots or aneurisms in my brain (something that my Grandmother has had several of and are often hereditary).

Then as I got older, for a few years in my late twenties, the migraines completely stopped.  I didn’t do anything differently, they just went away.  But getting into my 30’s, they suddenly reappeared in a totally different and very scary way, as Auras.  An Aura migraine is basically all the worst symptoms of a regular migraine, without the headache itself.  My first Aura was terrifying and I literally thought I was having a stroke.  I vividly remember it because I was alone at home and I had no idea what was happening to me.  It started with my tongue getting numb and my speech slurred, then the numbness moved into my arms, cutting off circulation and feeling like I couldn’t move my limbs.  Then my vision got blurred and my whole body felt like I could barely move.  It’s weird, but during Auras, I can literally feel the migraine moving through my body slowly.  After time, I got to the point where I could somewhat control it, in that I knew where it was headed next and how long it would approximately take until it was over.  Most of my auras lasted about 30-40 minutes, but after that, at least in the beginning, I would be so fatigued after them that I would have to lay down and sleep for hours after.  The Auras started coming a lot, and for about a year, I would say I had probably 15 of them, sometimes alone, sometimes at work, sometimes with Nick… one I vividly remember while I was teaching.

Fast forward many doctors later after these started happening, and one of them suggested taking an Excedrin Migraine pill right as I started experiencing symptoms and miraculously, that did help.  I would still work through the progress of the Aura, but at least by taking that at the beginning, it lessened all the symptoms and it wouldn’t wipe me out the rest of the day.  Long story short, the auras became debilitating and really very scary and still to this day, I never go anywhere without a bottle of Excedrin.

Along with all the migraine issues, for years I had been seeing specialist doctors due to the severe tingling in my arms and legs at almost all times.  My arms and legs would go numb for sometimes hours at a time.  One time a few years ago, my entire left arm went numb for 3 days.  I ended up in the ER because I legitimately couldn’t feel my arm for an extended time and after leaving with a large ER bill, they couldn’t tell me what even was wrong.  I saw genetic specialists, neurologists, and so many more over a few years time and they couldn’t ever give me a cause for the tingling.  They did find however during all of this testing a few other things: 1) My body can’t seem to absorb the vitamins and supplements that we get through food.  So things like iron and pretty much every type of vitamin, I don’t absorb enough so I have to supplement those daily and even with those extra supplements, my levels stay extremely low.  My iron also runs incredibly low and even with iron supplements, I teeter on the edge of Iron Deficient Anemia.  And 2) the inflammation levels in my body were off the charts.  Like on one test for inflammation, it was supposed to be between 0 and 5 – I was a 12 at one point. Due to the inflammation issue, they tested me for all sorts of lovely inflammatory disease like Lupus (which does run in my family), MS and Crohn’s Disease.  But those aren’t specific tests and while they were alarmed that my inflammation was so high, they couldn’t pinpoint a cause.

I know this is all long winded and getting very detailed, but the point of all of this is, that not one doctor ever told me that any of this might be caused by foods I was eating.  So earlier this year, I hit my low point.  I had had several auras in a row, closer together than ever before.  I felt horrific, every muscle in my body hurt so badly every single day that the muscle and joint pain became a real issue.  I had always had that but it got worse.  My tingling was terrible and all of it was beginning to really affect my life and my thought process around it.  So, I decided to change something and see if it worked.  I read somewhere that sometimes people that suffer from migraines had cut out diary and it had solved the problem.  So I thought I’d give it a try.

Fast forward about 6 months later, I’ve given up dairy (about 90%) and I swear, it has solved all of my problems.  The tingling, it’s still there but way less frequent.  The Aura migraines, all but gone (I’ve one in the past four months).  The muscle and joint pain, way lessened.  And my inflammation markers in my blood work, down to a 3.  Literally every single issue I’ve had over the past several decades, cutting dairy out of my diet has solved all of them.  And every issue I had that all the doctors told me weren’t related, isn’t it odd that one thing solved them all?

And I’ll be honest, there are times where I slip up and I immediately feel the effects.  When we went to Europe in July, I had been doing dairy free for about 3 months at that point and was feeling good.  Then I went on vacation and indulged, too much.  Like gelato for dinner with a latte, too much.  And I felt it.  I had several Auras that trip and generally felt terrible.  I came home though, got back on the bandwagon, and again felt so much better.  Then last week, I made a pumpkin pie (with dairy), and after eating it for breakfast four days in a row, I felt like Hell.  And yes, I know I should have made it diary free, but honestly, I’m still learning.  I’m still figuring out what works for me and what doesn’t.  For example, a little bit of butter in something doesn’t seem to bother me.  Or a little bit of cheese, for example, in our weekly breakfast burritos from the Farmers Market and I don’t feel a thing.  But overall, I’d say that I’ve cut out dairy about 90% and it’s completely changed my life.

I’m not one to push health stuff on other people, but my reason for sharing my journey to dairy free today is for maybe that one person that is struggling and maybe this might help.  If you’ve hit rock bottom and feel horrible, maybe dairy is the issue.  Or if not dairy, maybe gluten or some other food group.  Doctors in our society generally aren’t so great about suggesting this option.  And yes, an elimination diet is rough and I’ll be honest, I’ve never been able to fully get through one to try all of the food groups.  But honestly, dairy hasn’t been that huge of an issue for me to give up.  Of course there are things I miss, like burrata or a cup of tea with cream.  But I’ve also found that there are so many plant-based options for dairy that fulfill most of my cravings.  Coconut milk and rice milk have been my saving graces and by far my favorites out of the plant-based options.  I’m also really lucky in Portland that so many of our restaurants offer dairy free or vegan options, like my favorite ice cream shop that has a vegan coconut based dark chocolate ice cream that is divine.

So after this long winded story of my life, I share it to be honest but also to let you know that if you’re struggling with health issues, there could be an answer and it might be taking dairy out of your diet.  And just know that so many of us have struggled for years and it took a very long time to figure out the cause of issues that often debilitated our lives and you’re not alone.  On the surface, no one could tell how much I was struggling all those years with my health because I looked fine.  Literally, a doctor told me that once when my iron levels ended up being so low, I was full on in the Iron Deficient Anemia category and could barely make it through the day without a 3 hour nap I was so fatigued.  He looked at me and said “you look fine, so there’s probably nothing wrong.”  People are struggling and feeling horrible and still look fine, so just because someone pulls themselves together on a daily basis, doesn’t mean anything isn’t wrong.  So if you’re feeling that way, if you feel like you know something is wrong, don’t put it on the back burner, don’t feel like all hope is lost.  There is always something that can help, even if only knowing you’re not alone.

I stopped eating dairy and it changed my life, seriously.