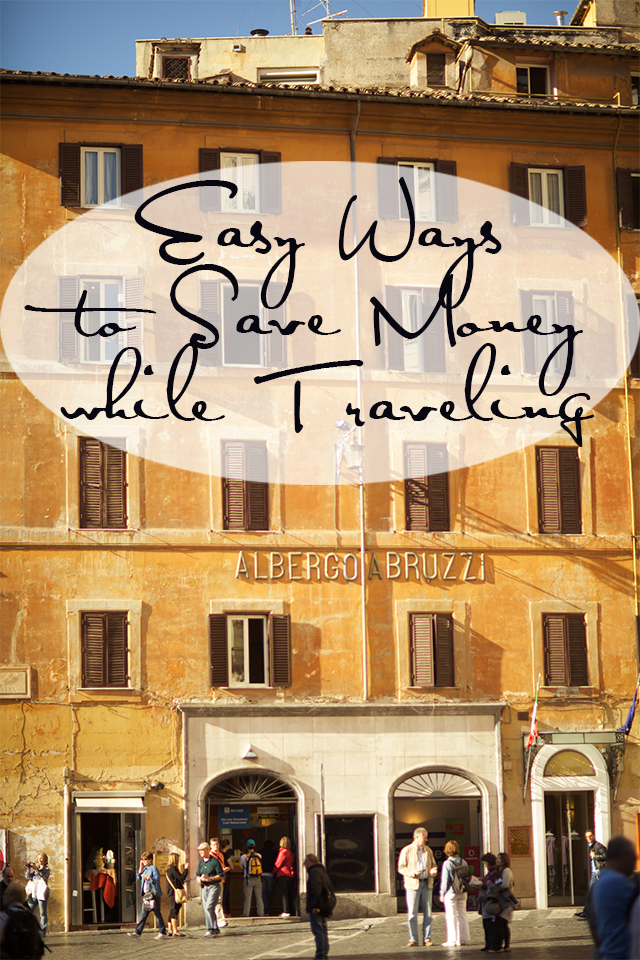 While I’ve touched before on ways to save money while traveling, there are many lesser known ways to save that aren’t often thought of.  Everything from which airport you fly into, to where and how you find lodging, where you spend your money on food and how you go about using transit spots, can end up saving you quite a bit of your hard earned money on a trip.  Over the years, we’ve slowly figured out ways to cut off costs here and there as we travel and today, here are some of those tips that we’ve slowly learned to hopefully help you chip off a little bit of what traveling costs.

Which airport you choose to fly into in any location can really make a difference on your fares.  There are tricks to picking your airport at your destination, so do your research.  Often times, fares can be half as much (or less in some cases) if you just pick the airport that works better for your situation.  The issue is that not many people even think about this and they just search for their city destination, not knowing that if you do the research and see what the options are, you could save a ton of money.

For an example of this, most major cities have multiple airports, usually a large international hub but also usually a smaller, more easily accessible airport as well.  Paris has Orly, which we love and try to use as much as possible.  It’s closer to the city, connects to the Metro and offers low cost carrier hubs there like EasyJet (which is one of our favorites in Europe.)  London has Gatwick, Milan has Linate and the list goes on.  This is also true in the States, as you can often fly into Newark for a lot less than JFK, depending on where you are coming from.  LA is the same, and often times fares to Long Beach are way cheaper than LAX.

Another thing to check into is how to get into the city from each of the airport options you might use as sometimes it’s way cheaper from certain locations over others.  For example, Newark has a train connection right into downtown NYC that’s way cheaper transport than grabbing a taxi from JFK.  In Paris, Orly is a way quicker metro trip to get to than Charles de Gaulle from the center of Paris.  Many times, these options can also save you money depending on where you’re headed.

Often times, certain destinations you want to travel to can be quite expensive to stay and find accommodation in your price range or availability on your travel dates.  Sometimes (depending on the situation of course) it’s cheaper and easier to find places to stay outside of where you’re headed and can even often turn into being able to explore more places.  A good example of this is our upcoming May trip to Santa Barbara.  Since we’re traveling on Memorial Day weekend, when I started looking at hotels it was incredibly expensive, not to mention hard to find a place we liked for our dates.  We ended up deciding to stay in LA (where there is a wealth of hotel options in every price range) and use points to rent a car and drive up the coast for the day to Santa Barbara.  This scenario ended up working best and will allow us to explore more of LA as well as Santa Barbara.

While we haven’t done this yet, we recently booked an apartment on the Ile St. Louis in Paris for our 4 days there in October.  I’m really anxious to try this option out as so many fellow travelers rave about sites like AirBnB (who we booked through).  This option can be quite nice in terms of saving money on hotels in cities that tend to have expensive accommodation, like Paris.  Our usual hotel that we love in Paris runs about $330 a night and while we love it, this year we decided to try out the apartment option which cost us half of what we would have paid for our favorite hotel.

In certain cities, for example like Paris or Honolulu, there are definitely “tourist spots” and restaurants that surround them that are always way more expensive than going a few streets away from the tourist attraction.  For example, in Paris, the cafe right next to Notre Dame is going to be way more expensive (and honestly, probably not as good) as the one down the street or across the Seine.  In Honolulu, everything on the main boulevard through Waikiki is going to be double the price of what you can find if you head to more local spots.

A good option is asking people in those cities what their favorite local spots are or just wandering down side roads away from the masses of tourists and you’ll save a ton of money on food costs while traveling.

Another thing we’re going to try out this October on our trip to Europe is staying one of our nights in transit at a train station hotel in Brussels.  We are going to be just passing through Brussels on our way from Amsterdam to Paris and want to stop off in Belgium for a night.  Though because of train times and timing, it’s going to be easier if we stay at the train station for a quick night in transit and it’s often cheaper to stay at transit spots like train stations or airport hotels if it works with your schedule.

I wouldn’t recommend doing this for multiple nights as you don’t really get to see the great spots of a city by doing this, but if you’re going to be in transit anyway, sometimes this is a good option to save money and time instead of having to go into the city center while traveling.