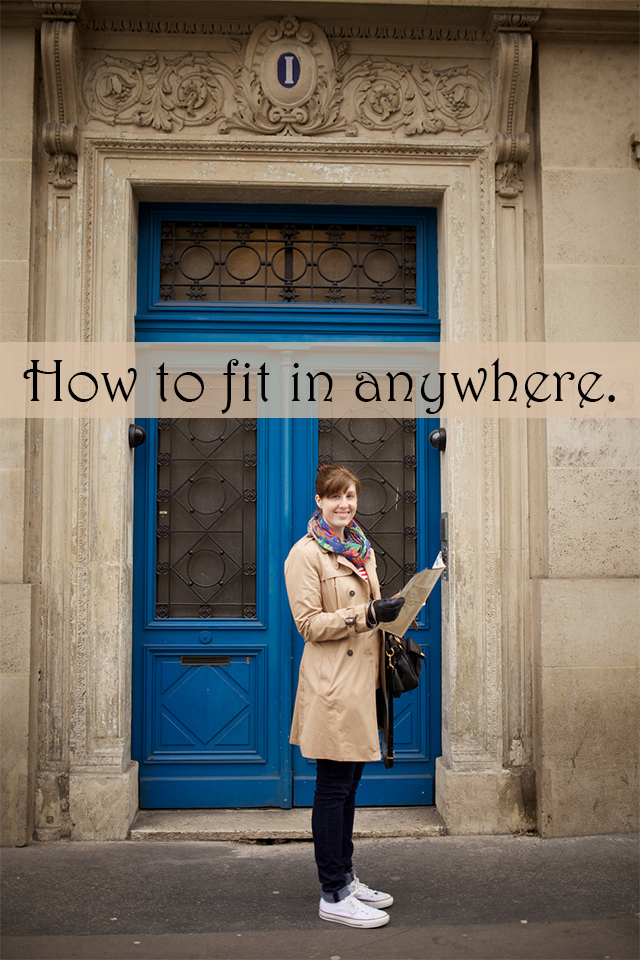 It’s sort of a running joke with Nick and I about how often I’m asked for directions, both at home in Portland and when we’re traveling.  I’m stopped all the time on street corners in my home city of Portland by tourists wondering which direction to the Pearl District or how to get to Pioneer Place but I’ve also been stopped numerous times abroad in places all over the world for directions.  I’ve explained in French how to get to Paris on the train from Orly to a tourist who stopped me to ask (while I was just a tourist myself as well) and pointed tourists in London toward Hyde Park.  I was also just asked for directions in LA this past weekend and it’s becoming a bit of a phenomenon when we travel.

I think that it is due in part to the fact that when I travel, I do know my way around.  I am not wandering aimlessly, as I’ve done research before hand to have somewhat of a handle on my surroundings.  I generally know which direction things are in pretty well.  Perhaps it’s just that I look like I know what I’m doing, but there are definitely tips and tricks to help you blend into wherever you are and I’ve gotten really good at them over the years of traveling so that you don’t look like the out of place tourist.

So here in no particular order are ways to help you blend in while traveling, after all, who wants to stick out as the annoying American tourist?  I surely don’t and I employ all of these tips below regularly when we travel.  The more I can look like and blend in with the locals the better! 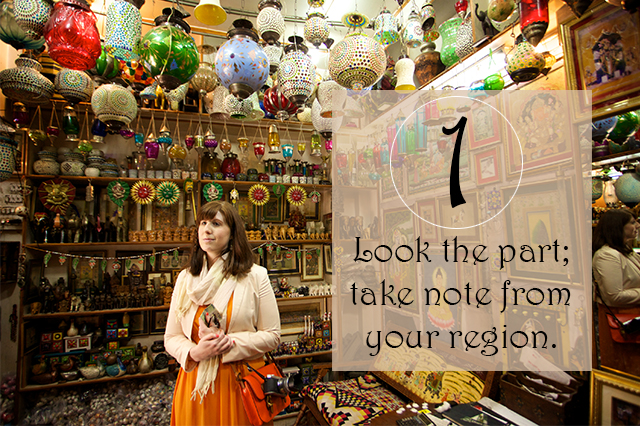 I think one of the main reasons I get mistaken for locals a lot is because of how I dress and look while abroad.  I spend a lot of time choosing my outfits to pack for the trip before hand, doing research on local customs and what’s appropriate in the region we’re headed as well as colors that will be suited well for the spot.  For example, when we traveled to India I wore a lot of bright colors as India is a wash of color everywhere, but I also dressed really conservatively as Indian women do with long maxi dresses, light jackets and scarves.  I did the same thing when we traveled to Morocco a couple years ago and it really does help a lot to blend in with how you dress while traveling.
Another thing that might seem a little strange is hair color.  Personally, I like my hair darker.  I’m more naturally a lighter blond but I make sure to keep my hair darker especially before we travel to a country that is predominantly darker skin and hair, like India or Asia or the Middle East.  It helps to blend into a crowd better and connect a little more to the local region.
Not that I think I will necessarily pass as a local everywhere I go, but at first glance, if my hair is dark and my clothing is well suited to the location, I won’t automatically be picked out of a crowd in a lot of places. 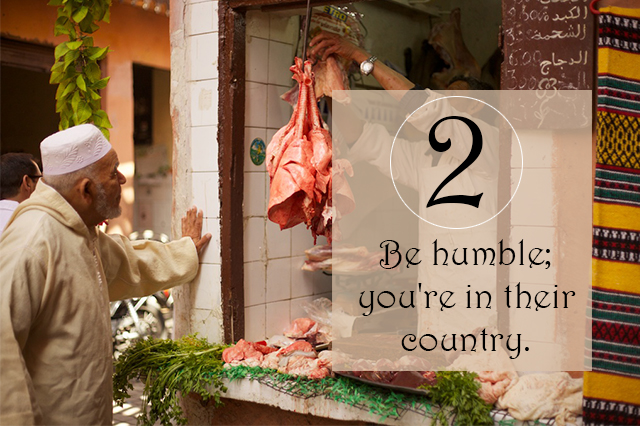 I think one of the major mistakes Americans especially make while traveling abroad is automatically condemning things that are done differently in different parts of the world.  Whether its assuming everyone should speak English or having negative attitudes toward local cultures or traditions.  Don’t do that, just don’t.  The world is huge and everyone does things differently.  It’s so important as a traveler to respect local traditions or cultures that might be different from our own and to be humble in their country.  After all, don’t we want that when others come to our own countries? 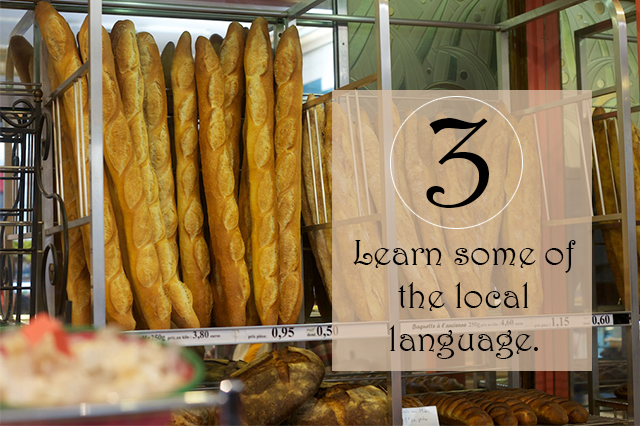 No matter where we’re headed, I make a sincere effort to learn at least a little bit of the language.  Even if I can only manage hello, thank you and goodbye, it really does go a long way.  When we travel to places that I know the language, like France or places that speak Spanish, I go out of my way to try and speak as much as I can in the local language, even if it’s not great, the locals do really appreciate that you make the effort.
It also really helps to make you pass somewhat as a local in places if you can speak the language.  For instance, in France, I get asked directions a lot during our trips there by tourists and I think it’s perhaps because they hear me speaking in both English and French sometimes, and they assume that I know the area first off, but also that they know that I’ll be able to communicate with them. 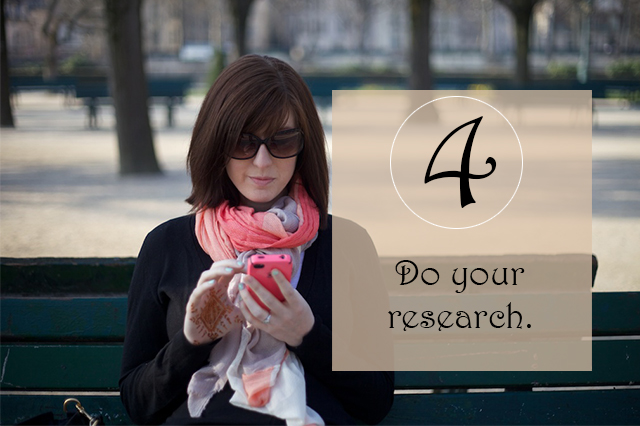 Research is a hugely important aspect of any trip, but to be able to fit in anywhere, you have to know your surroundings.  I do a lot of research before our trips, I look at maps so I’ll know directions once we get there.  I look up all the major spots we’ll go to so I know where they are and how they are located in relation to other spots in the city.  I do research on how we’ll get there, what there is to do and how to do it.  I research ticket costs or how much things will cost.  If you have all this information before getting to your destination, it will make it much easier to fit in and know what you’re doing ahead of time. 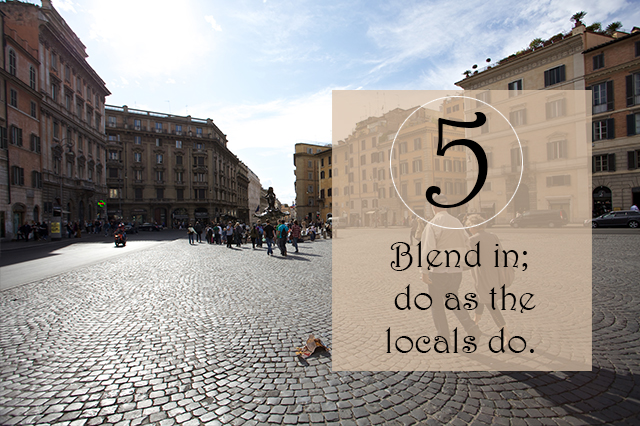 Perhaps the most important tip to blending in, do as the locals do.  Act as they do, speak as they do, use public transportation as they do.  Take your cues from what the locals are doing around you, they live there, they surely know the best routes or the best restaurants.  When in Rome, do as the Romans, when in France, be French.  You’ll find some of the best spots in a city by blending in with the locals!
❮❮ Previous Post
Next Post ❯❯