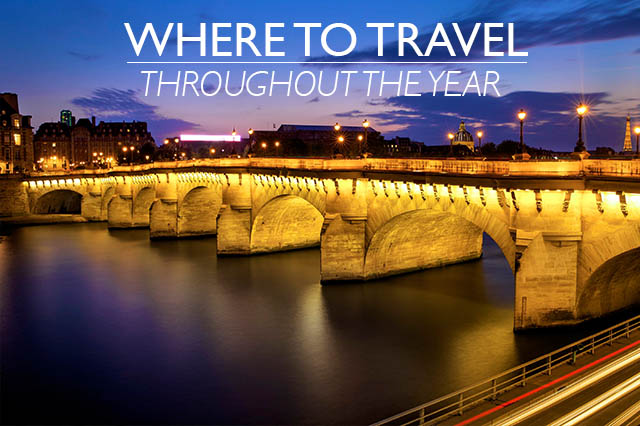 One of the things that is often hard to gauge when planning travel is when it’s best to travel to certain places, what the weather will be like in different times of year and to plan a trip based on the kind of weather/atmosphere you enjoy.  For instance, Nick and I prefer to travel in off times of year for a number of reasons (it’s cheaper, less people and cooler weather) but you have to gauge the situation based the specific place you’re looking at traveling to.  So to make it easier and without having to do a ton of research, I’ve made a list of the places I would suggest for each season throughout the year.  Take a look, pick a place and the rest is history! 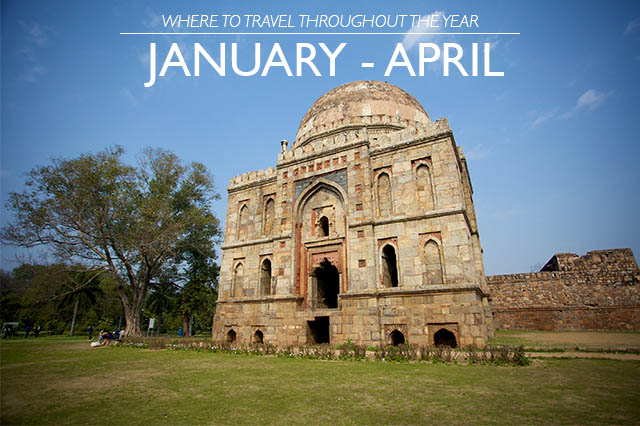 India : Our visit in February was the perfect weather in this gorgeous country with crisp blue skies, temperatures in the 70’s and less smog than in other times of year.

Thailand : For a visit to this SE Asian nation when the weather won’t knock you over with humidity and heat, early in the year is the perfect time to visit.  Bangkok is slower and quieter than during peak travel times and it’s cool enough to not suffocate.

Northern Italy : For a trip through places like Milan and Verona, the early Spring months are the perfect time to explore this gorgeous region.  March – April will still be cool here but you’ll find pleasant temperatures and a quiet version of these tourist hot-spots.

Morocco : March and April are quite pleasant in this Northern European oasis.  Temperatures will raise into the 80’s during the day, perfect to explore.  Try to miss out on the weeks of Europe’s Spring vacations as it gets a large crowd then, but try early March or later into April for a great escape. 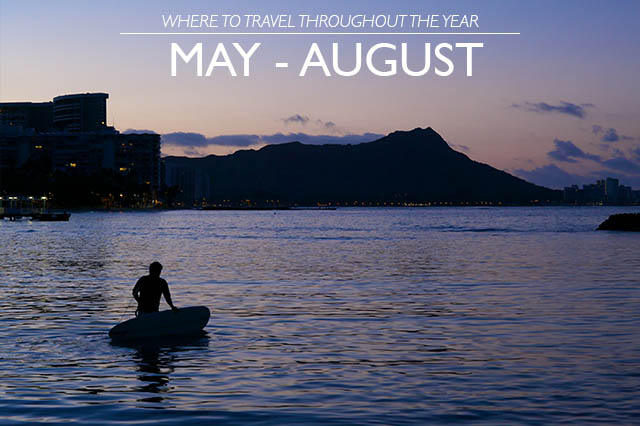 Hawaii : I go to Hawaii for work numerous times of the year and I lived there a while as well, so I’ve seen every season come and go in the Islands.  My favorite time of year there though is during the Summer.  If you want to make sure you’ll have good weather without a ton of rain, this is the time of year to go.  While the temperatures are pretty much the same year round here, I happen to really love the early mornings and evenings during the Summer in Hawaii which produce gorgeous colors in the skies and the options for great weather.

Nice : For a touch of Southern France, late Spring is the time to go.  You’ll hit the warmer weather coming into season and if you go before the Summer crowds arrive, it will be the perfect region to explore.

Pacific Northwest : The West Coast of the US is perhaps at it’s peak during this time of year.  Temperatures are still cool in the mornings and evenings but daytime highs can get warm and you can explore everything that this gorgeous region has to offer.

Victoria and Vancouver, BC : While this technically could fall under the Pacific NW above, these 2 lovely Canadian cities are gorgeous this time of year.  Missing most of the rain, the weather is pleasant and these cities (both on water) are beautiful when the sun comes out. 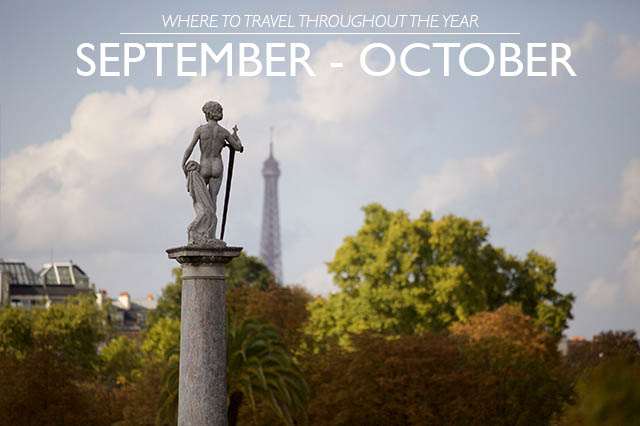 Paris : I’ve seen Paris in all the seasons of the year and my all time favorite time to visit the City of Light is in the early Fall when the colors are beginning to change and when the temperatures hover around 65-70 F.  The city is also quieter this time of year than in the Summer when the majority of crowds are visiting.

London : For many of the same reasons as Paris, London is my favorite in the Fall.  There is nothing quite like wandering Hyde Park as the leaves are falling and taking in the magic of this gorgeous city when the air is getting crisp.

Napa : While this part of California stays fairly warm year round, the Fall is magical as the vineyards are changing colors and omit a golden hue across this part of the state.

Amsterdam : Wandering the canals of the mystical Dutch city with waffle cookie in hand while the leaves are changing and falling from the tree lined streets, there is perhaps nothing better.  Bundled against on the oncoming cold and exploring with someone you love is perfect in Amsterdam this time of year.

Rome : For a bit more of a warmer climate, Southern Italy or in particular Rome, is lovely in the early Fall.  Temperatures are lower than in the Summer to make it easier to wander the age-old streets of Roma but still warm enough to indulge in all the gelato you want to. 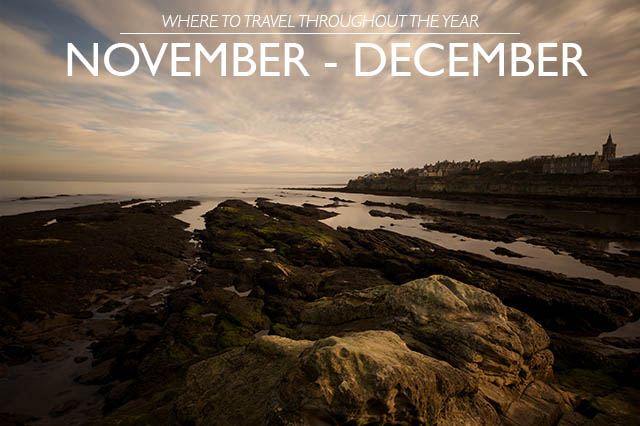 Scotland : While the weather may be a bit harsh for some in Scotland in the Winter, I find it’s incredibly beautiful on those Winter days when the sky is peaking through and there is a deep chill in the air.  Somehow this gorgeous land looks even more beautiful in the Winter towards the end of the year and places like Edinburgh and St. Andrews seem to have even more charm.

Ireland : For many of the same reasons as Scotland, I found Ireland incredibly gorgeous in the Winter.  With plenty of rain, the green is an incredible shade of the color, the sheep are fluffy and white, the little towns eerily seeming out of a fairytale.

New York City : There are few times of the year that NYC is more magical than in the month or two leading up to Christmas.  With lights all over, skating rinks, Christmas trees and window displays galore, November and December are magical in this infamous city.

Iceland : For a winter wonderland destination this time of year, Iceland is the place to go.  You’ll get snow, horses and friendly locals for a winter escape in Iceland.