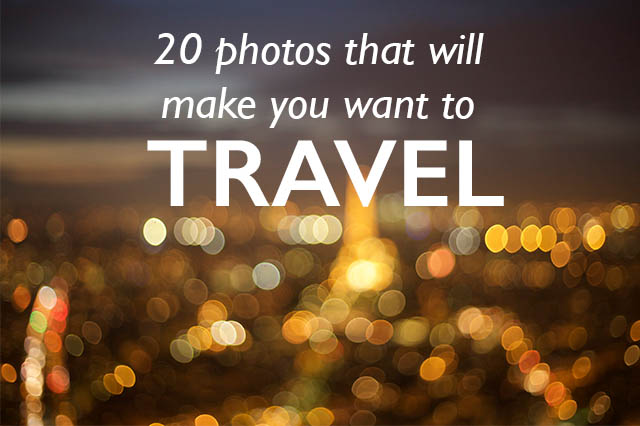 This world we live in is full of incredible places, places that are exotic, places that are serene, places that have a feeling unlike anywhere else, and places that once you experience, you’ll never forget.  I’m very lucky to have a photographer for a husband and when we travel, his vision of each place is forever captured in his beautiful photography so that when we look back years later, we can remember specific moments around the world.  I was recently going back through our archives of Nick’s photos and realized while I’ve shown many of these shots over the years of this blog in random posts, I’ve not necessarily shared my favorite photos all in one post before.  So, letting them speak for themselves, here are 20 of my favorite photos from our travels (all shot by Nick with the exception of the Honolulu sunset which I took at the bottom).  20 photos that will make you want to jump on a plane and head to many of these gorgeous places in this world we call home.  Here are 20 of my favorites and the places that inspired them. 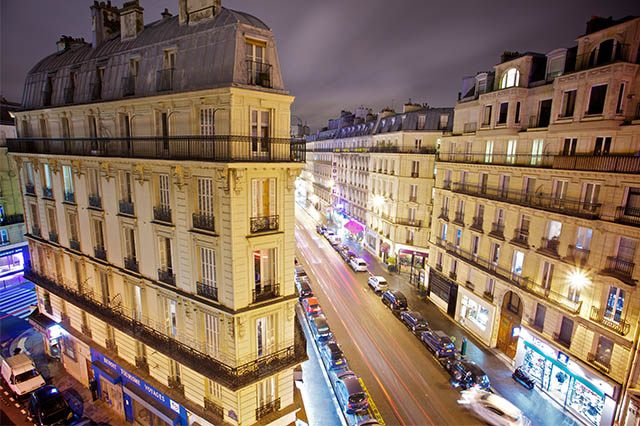 Paris, France – This shot was taken on our honeymoon in the Opera District of Paris. 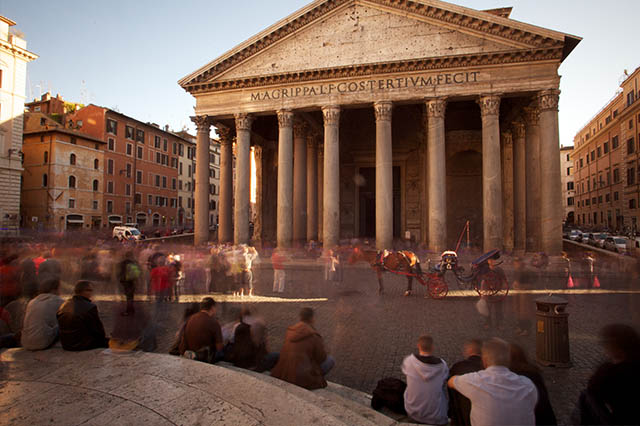 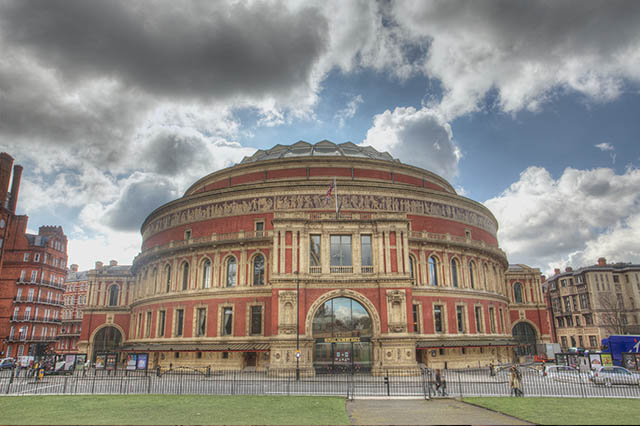 Royal Albert Hall in London, England – This shot was taken as we wandered down the edge of Hyde Park on an early Spring day in London. 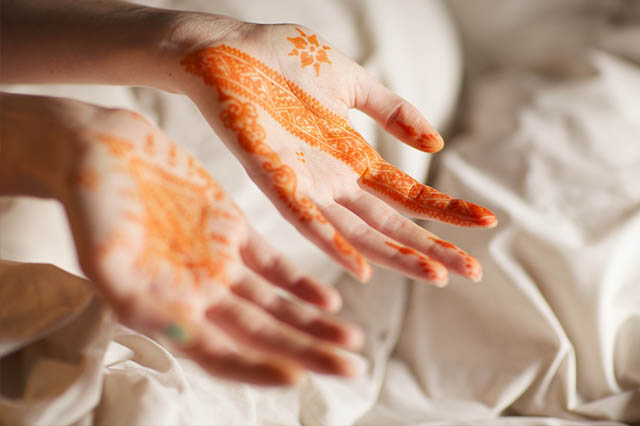 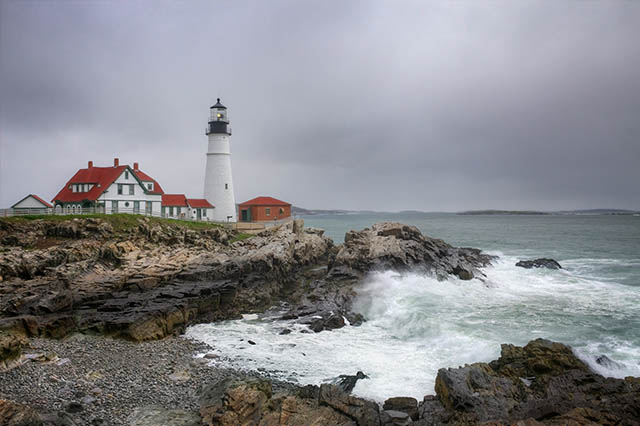 Portland Head Lighthouse in Maine, USA – This shot was taken during our road trip through New England on the coast of Maine just South of Portland, Maine.  It was freezing cold and windy and the sea was roaring against the rocks. 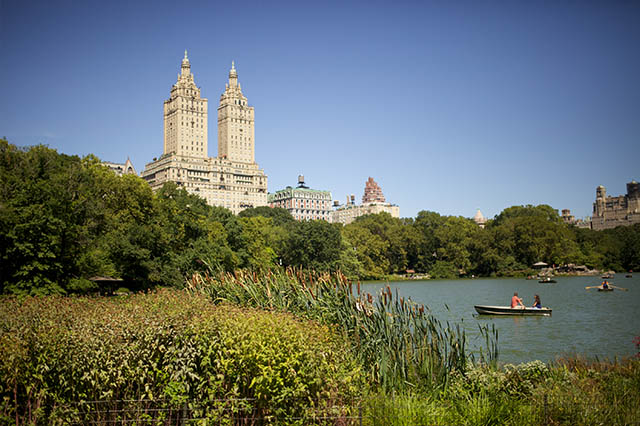 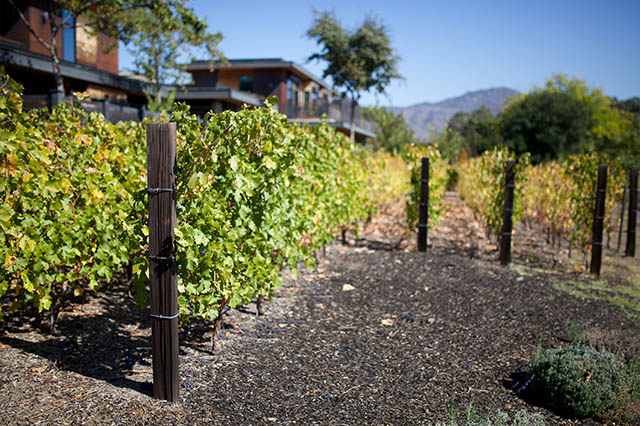 Vineyards in the Napa Valley in California, USA – This shot was taken on our road trip through the Napa Valley.  We stopped for snacks in one of the towns along the way and came across this small but beautiful vineyard right next to the road. 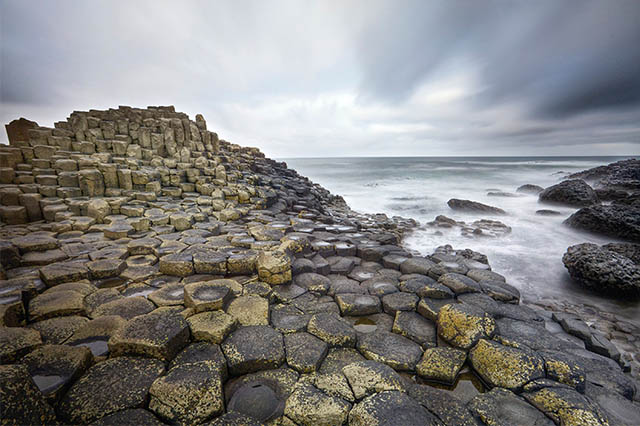 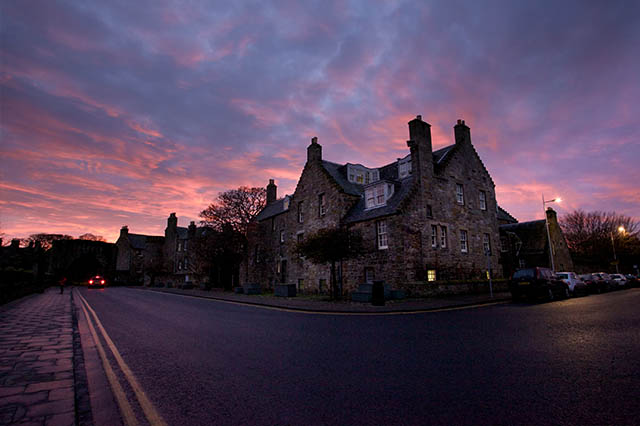 St. Andrews, Scotland – This photo was taken near the Cathedral ruins in St. Andrews as one of the most stunning sunsets I’ve ever seen took over the sky.  It was a cold crisp evening in Scotland, one that I’ll never forget as the sky burst into color. 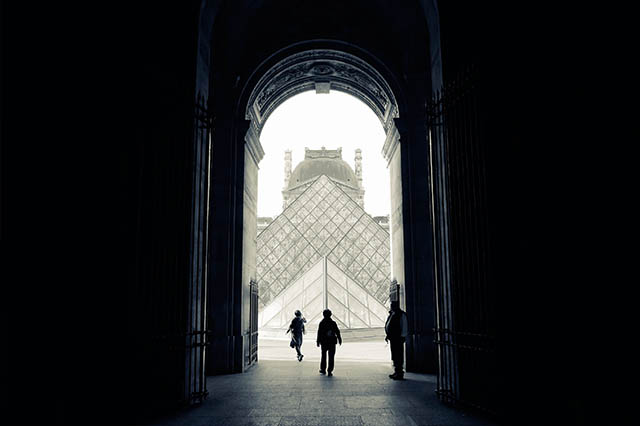 The Louvre in Paris, France – This shot was taken as we wandered through the Louvre grounds in Paris.  It was early and the museum hadn’t opened yet so it was quiet and still and I love the juxtaposition of old and new in this photo. 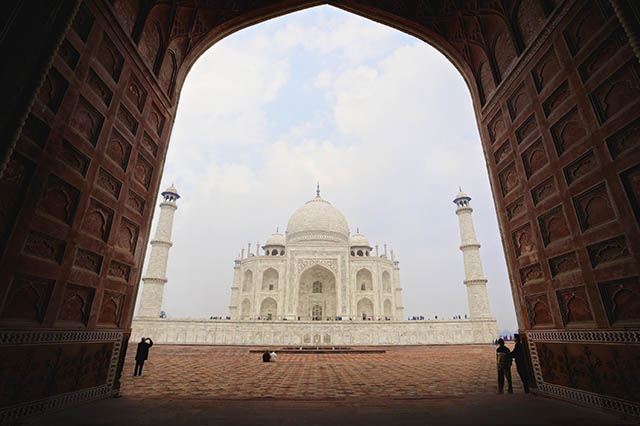 The Taj Mahal in Agra, India – This shot was taken on the side of the Taj Mahal as we wandered around the grounds of this beautiful landmark.  I’ll never forget the feeling of seeing this monument, just as surreal in person as I imagined. 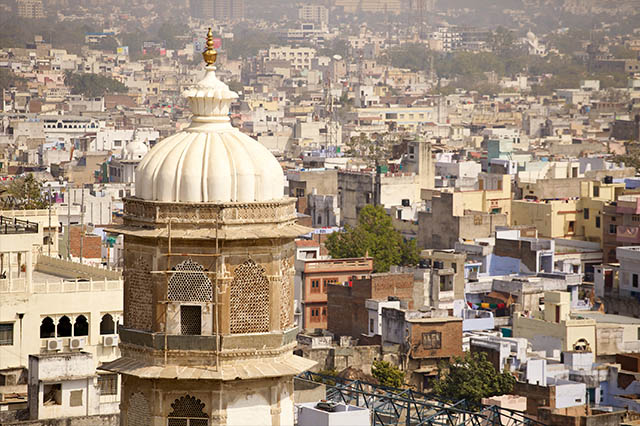 Udaipur, India – This shot was taken from the City Palace in Udaipur overlooking the sprawl of this city.  I loved the colors of the buildings and the subtle beauty of the buildings that barely are held together from age. 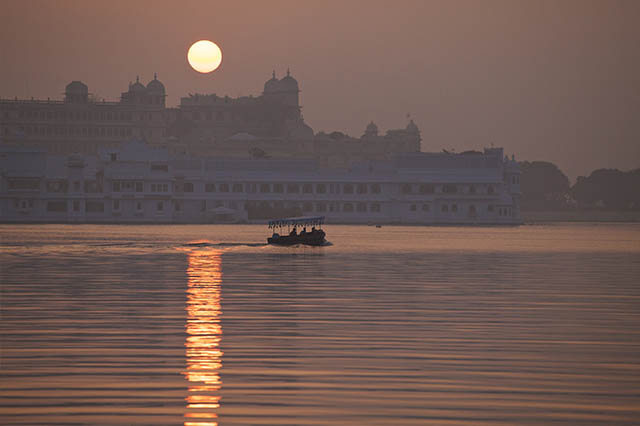 Sunrise over Lake Pichola in Udaipur, India – This shot was taken from the banks of the Oberoi Udaivilas grounds in Udaipur.  Nick got up early and ventured out to take photos at sunrise and caught the early boats crossing Lake Pichola as the bright Indian sun rose behind the City Palace in the background. 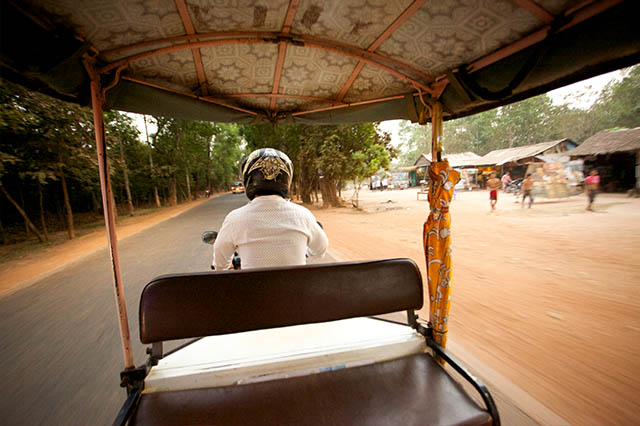 In a tuk tuk in Siem Reap, Cambodia – This photo was taken from our perch in the back of a tuk tuk as we sped down the streets in Siem Reap, heading from the temples into town for dinner. 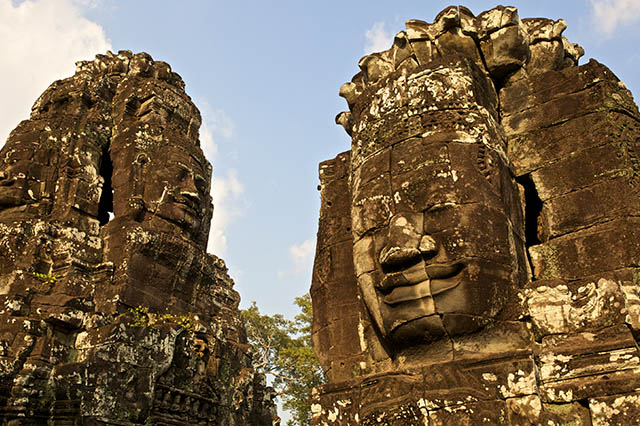 Bayon Temple in Angkor Thom in Cambodia – This shot was taken at our favorite temple in Siem Reap, the Bayon Temple in the Angkor Thom complex with giant faces that shine down smiling at you as you wander around.  We were seemingly alone wandering this temple and the feeling is one I’ll never forget. 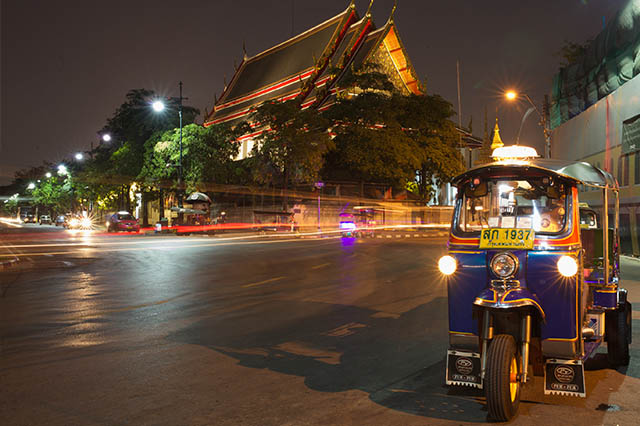 Bangkok, Thailand – This shot was taken on our last night in Bangkok we stayed to watch the sunset over Wat Arun and then wandered down the road to grab a tuk tuk back to our hotel.  We stopped for a moment as Nick captured this view of the city as it lit up at night. 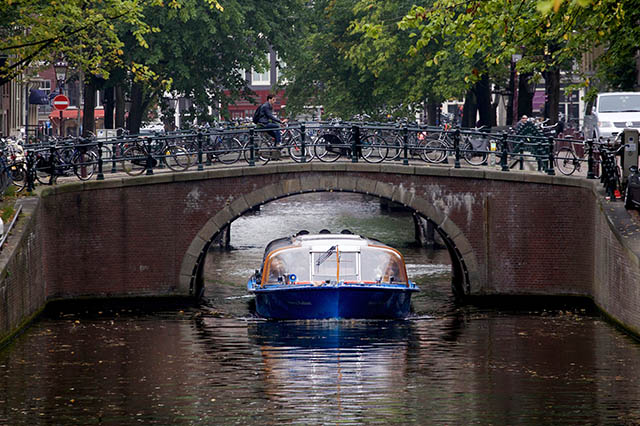 Amsterdam, Netherlands – This shot was taken as we wandered the canals of Amsterdam.  The shot is so typical of the city as the leafy tree lined streets line streets covered in bikes with a canal boat passing under. 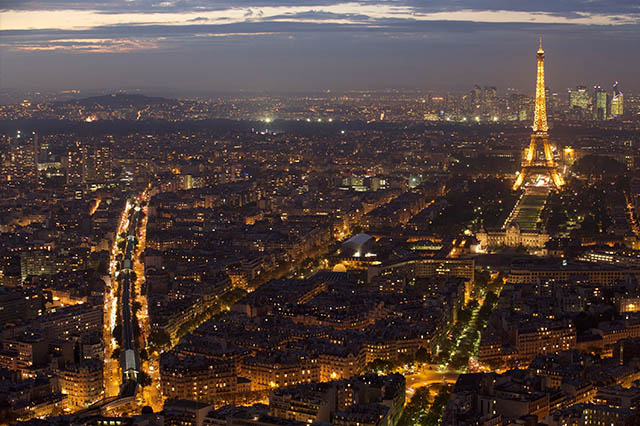 View from Tour Montparnasse in Paris, France – This shot was taken from high above Paris at the top of the Tour Montparnasse.  The tower offers incredible views over all of Paris, which are especially beautiful as the sunsets and the lights start to glow. 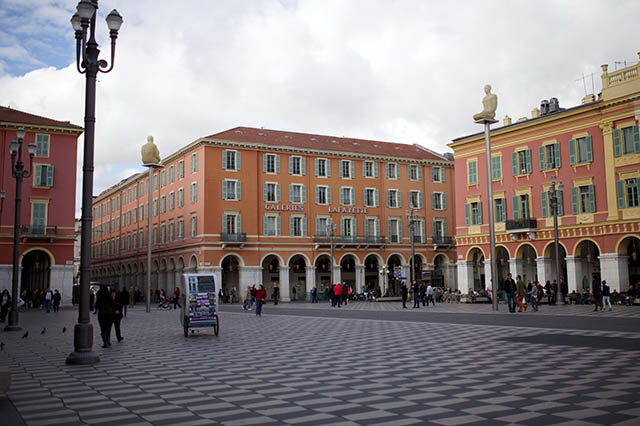 Nice, France – This shot was taken in the main square of Nice where the Old Town meets the new.  I remember thinking how gorgeous the colors of the buildings were with the checkerboard pattern in the square, a gorgeous mixture of old and new. 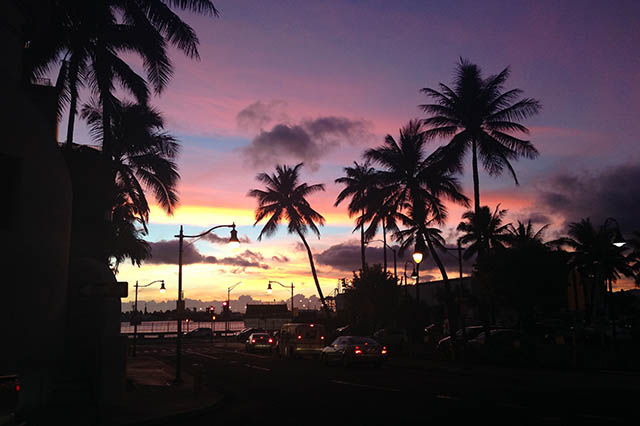 Honolulu, Hawaii – The only shot on this list that I took, I couldn’t help but include this one.  Taken in Honolulu, it was one of the most beautiful sunsets I’ve ever seen.  The sky was streaked with color and the silhouette of the palm trees created such an incredible scene.

All of these photos by Nick Nieto Photography and all rights are reserved.